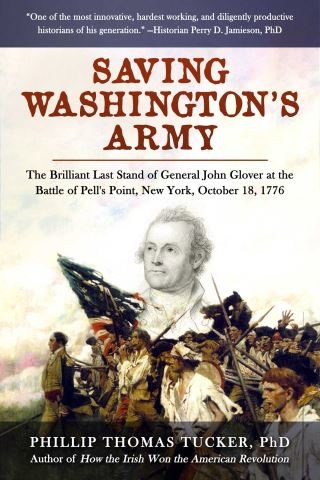 Learn the little-known history of the forgotten American Revolution Battle of Pell's Point and the heroism of John Glover.

General William Howe and the mighty British-Hessian Army possessed the golden opportunity to cut-off, trap, and then destroy General George Washington’s Army before he could retreat north and escape from Harlem Heights, New York, when he landed his army at Pell’s Point north of New York City. Howe’s bold amphibious operation north of Washington’s Army threatened to end the life of the Continental Army and the revolution.  However, the brilliant delaying actions of Colonel John Glover and a small force of New England Continental troops saved the day and Washington’s Army by preventing Howe’s advance inland to intercept Washington’s route of retreat to White Plains.

Employing brilliant delaying tactics when outnumbered by more than five to one, Glover inflicted heavy losses on the attackers to ensure that Washington’s Army survived to fight another day. Ironically, the Battle of Pell’s Point has been perhaps the most important forgotten battle of the entire American Revolution.

In Saving Washington's Army, renowned historian Phillip Thomas Ticker, PhD, recounts the little-known story of the Battle of Pell's Point and the heroism of Colonel John Glover with the care and attention-to-detail for which he is known.

Phillip Thomas Tucker: Phillip Thomas Tucker, PhD, is the award-winning author of nearly eighty books of history. He received his PhD from St. Louis University, St. Louis, Missouri, in 1990. Tucker has long specialized in producing groundbreaking history in many fields of study, including women's history and African American history. He has been recently recognized as "the Stephen King of History" after more than three decades of authoring important books of unique distinction. His previous books include Pickett's Charge, How the Irish Won the American Revolution, George Washington’s Surprise Attack, Exodus from the Alamo, and Father of the Tuskegee Airmen, John C. Robinson. He lives in Central Florida.