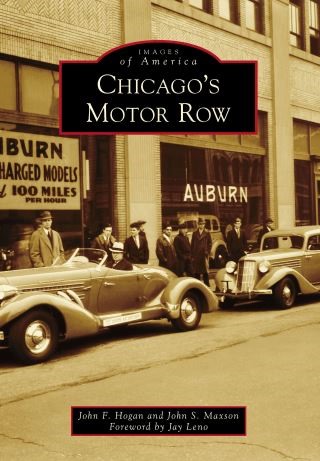 Chicago's Motor Row earned a spot in the National Register of Historic Places by pioneering a new way to market an invention that was remaking America--the automobile. From approximately 1905 to 1936, well over 100 makes of car were offered by dealers in the 28-acre district. Motor Row started when Henry Ford, the best known name in automobile manufacturing, opened one of his first dealerships outside Detroit on South Michigan Avenue near the homes of Chicago's most affluent citizens. Others followed with sales and service buildings designed by the nation's foremost architects, often side by side, inviting buyers to check out the models on display behind plate glass windows. Shoppers flocked to the automotive smorgasbord. Although the auto dealers have left, most of these architectural jewels remain.

John F. Hogan: John F. Hogan is a veteran broadcast journalist and corporate executive. He was a reporter and editor for WGN Radio and Television in Chicago and director of communications for one of the nation's largest electric utilities. John S. Maxson, a lifelong antique car enthusiast, retired as president of the advocacy organization for businesses on Chicago's North Michigan Avenue. Jay Leno, who contributed the foreword, was host of The Tonight Show with Jay Leno and The Jay Leno Show from 1992 until 2014. One of the country's most respected authorities on automobiles old and new, he currently hosts Jay Leno's Garage.|||