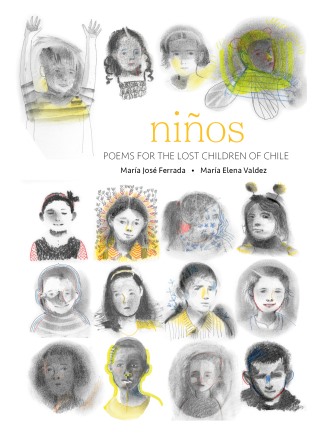 Poems for the Lost Children of Chile

On September 11, 1973, a military coup plunged Chile into seventeen long years of dictatorial rule. Only the return of democracy could reveal the full horrors of Augusto Pinochet’s regime: 3,197 people dead or disappeared—including thirty-four children under the age of fourteen.

This book is a stirring memorial to those victims and to the cost of extremism. Thirty-four poems—one for each child lost—consider the diverse hopes of these fragile young lives. From Alicia to Jaime, Héctor to Paola, Soledad to Rafael, they were brave and creative, thoughtful and strong. In these pages, some children watch for the changing seasons. Some listen for new sounds on rainy afternoons. And some can’t wait for their next birthday.

Featuring gentle, emotive poems and soft, pastel-toned illustrations, Niños is an unforgettable tribute to the children of Pinochet’s Chile and all those threatened by political violence across the world.

María José Ferrada:
María José Ferrada is the author of Mexique: A Refugee Story from the Spanish Civil War (Eerdmans). She is a recipient of the Municipal Prize of Literature of Santiago, as well as the Academy Award from the Chilean Academy of Language. María currently works as the children's editor of Chilean Memory, a digital resource center of the National Library of Chile.

María Elena Valdez studied art in Caracas, Venezuela. She has illustrated books published across Latin America, and she has also collaborated with World Vision Costa Rica and the International Union for the Conservation of Nature. This is her first book published in English.
María lives in Barcelona, Spain. Follow her on Instagram @mariaelena.valdez.a or visit her website at mariaelena valdez.com.