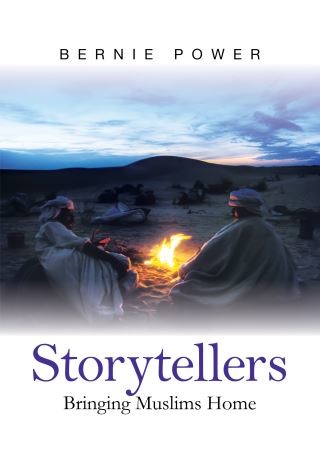 In Storytellers: Bringing Muslims Home, Bernie Power shows how the art of storytelling can be used to answer the questions that Muslims ask about the Christian faith. He does so by telling us a story within a story, which points to the greatest story ever told: the story of God’s Son, Jesus Christ.
In Bernie’s novel, we are introduced to a young Christian couple: Tom, a teacher, and his wife Hanna, a doctor, who travel to the Middle East to live and work with the Yemeni people. Together they face challenges, make friends and answer questions about their faith using the method most favoured by both Arabic cultures and Jesus himself – stories.
Storytellers: Bringing Muslims Home is packed with references from both the Bible and the Qur’an. It is an invaluable resource for Christians engaging with the followers of Islam, Muslims who are curious and wish to understand more about Christianity, and to anyone with an interest in Christian–Muslim dialogue.

Bernie Power: Bernie Power has been studying Islam and interacting with Muslims for over 40 years. He has degrees in Science, Arts and Theology, and his doctorate compared the Hadith, the early traditions about Muhammad, with biblical teaching. He currently lectures at the Melbourne School of Theology in Islamic studies. Bernie, his wife Catherine, a medical doctor, and their two sons worked as Interserve partners in Pakistan, Jordan, Oman and Yemen for over 20 years. Today Bernie engages with Muslims in Australia, and this includes public debates with Islamic scholars. He travels to many countries to teach about Islam and to share the good news with Muslims. He has written three books on the Muslim–Christian interface. Bernie’s passion is to teach Christians about Islam, and Muslims about Jesus.