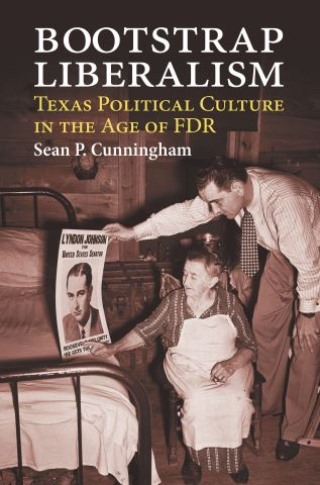 Texas Political Culture in the Age of FDR

Has Texas always been one of the United States’ most conservative states? The answer might surprise you. Bootstrap Liberalism offers a glimpse into the world of Depression-era Texas politics, revealing a partisan culture that was often far more ideologically nuanced and complex than meets the eye.

The Lone Star State is often viewed as a bastion of conservative politics and rugged “bootstrap” individualism, but that narrative overlooks the fact that FDR's New Deal was quite popular in Texas, much more so than previous histories of the era have suggested.

While it is true that many Texas Democrats remained staunchly conservative during Franklin Roosevelt’s presidency, and it is also true that many of these conservatives formed the basis of an established majority that would grow stronger in the decades that followed, it is simultaneously true that ordinary voters—and a good many politicians—embraced New Deal policies, federal experimentation, and direct economic aid, and often did so enthusiastically as liberal Texas Democrats rode FDR’s coattails to electoral success.

Texas political leaders recognized the popularity of the New Deal and identified themselves with FDR for their own political advantage. Using original resources mined from six research archives, Bootstrap Liberalism explores campaign strategies and policy debates as they unfolded at the local, state, and national levels throughout the Great Depression and World War II eras, revealing a consistent brand of pro-New Deal messaging that won favor with voters across the state. Most Texas Democrats did not apologize for supporting FDR. Rather, they celebrated him and often marketed themselves as New Deal Democrats. Voters endorsed that strategy by electing liberals throughout the 1930s and early 1940s.

Sean P. Cunningham: Sean P. Cunningham is associate professor and chair of history at Texas Tech University and author of Cowboy Conservatism: Texas and the Rise of the Modern Right and American Politics in the Postwar Sunbelt: Conservative Growth in a Battleground Region.