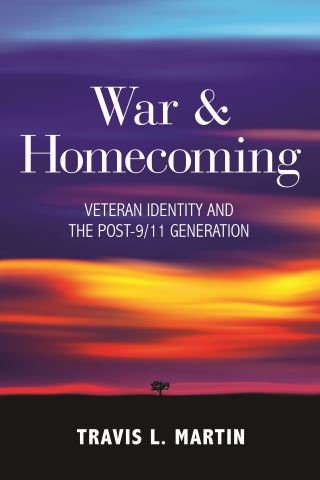 In War & Homecoming: Veteran Identity and the Post-9/11 Generation, Travis L. Martin explores how a new generation of veterans is redefining what it means to come home. More than 2.7 million veterans served in Iraq and Afghanistan. Their homecomings didn't include parades or national celebrations. Instead, when the last US troops left Afghanistan, American veterans raised millions of dollars for the evacuation of Afghan refugees, especially those who'd served alongside them. This brand of selflessness is one reason civilians regard veterans with reverence and pride.

The phrase "thank you for your service" is ubiquitous. Yet, one in ten post-9/11 veterans struggles with substance abuse. Fifteen to twenty veterans die by suicide every day. Veterans aged eighteen to thirty-four die at the highest rates, leading advocates to focus on concepts like moral injury and collective belonging when addressing psychic wounds. Martin argues that many veterans struggle due to decades of stereotyping and a lack of healthy models of veteran identity. In the American unconscious, veterans are treated as either the superficially praised "hero" or the victimized "wounded warrior," forever defined by past accomplishments. They are often appropriated as symbols in competing narratives of national identity. War & Homecoming critically examines representations of veterans in patriotic rhetoric, popular media, literature, and the lives of those who served. From this analysis, a new veteran identity emerges—veterans as storytellers who reject stereotypes, claim their symbolic authority, and define themselves through literature, art, and service. Their dynamic approach to life after military service allows for continued growth, agency, individuality, and inspiring examples of resilience for others.

Travis L. Martin: Travis L. Martin is founding director of the Kentucky Center for Veterans Studies at Eastern Kentucky University. He has established several nationally recognized programs to support returning veterans in higher education and the nonprofit sector. A scholar of American literature, psychoanalytic trauma theory, and social theory, Martin presents frequently at conferences and universities. He has published dozens of research articles and creative short works on veterans’ issues. As a sergeant in the US Army, he served during two deployments in the Iraq War (2003–2004 and 2005).