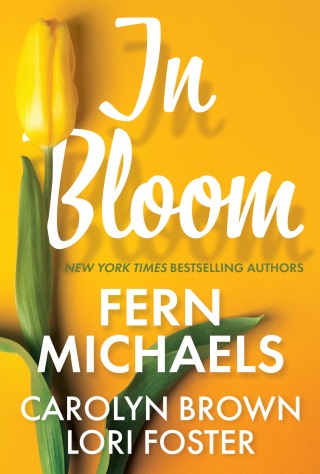 After years spent traveling the world as a flight attendant, Gracie Walden is ready to stay a little closer to her roots, starting with two weeks at home in Amarillo, Texas. But there’s unexpected turbulence between her mother, Ella, and her older sister, Hope—and it will lead to a revelation that changes Gracie’s life in amazing ways . . .

Monica Allen still hasn’t forgiven Tyler Magee for breaking her heart when they were teenagers. Ten years on, they’re back in Luella, Texas, visiting their respective grandmothers. and there’s just a white picket fence and a whole lot of awkwardness between them. Will two weeks be long enough for Monica to learn to stop holding a grudge—and hold on to love?

MEANT TO BE * Lori Foster

When Cory Creed was just a little girl, she knew she’d grow up to marry Austin Winston—and she made the mistake of telling him so. Tired of watching him avoid her ever since, Cory has  decided it’s time to leave Visitation, North Carolina, and Austin, behind. But Austin has finally realized what Cory was once so sure of, and now it’s his turn to prove they belong together . . . with a little help from their mothers.

Fern Michaels: FERN MICHAELS is the USA Today and New York Times bestselling author of the Sisterhood, Men of the Sisterhood, and Godmothers series, as well as dozens of other novels and novellas. There are over one-hundred ten million copies of her books in print. Fern Michaels has built and funded several large day-care centers in her hometown, and is a passionate animal lover who has outfitted police dogs across the country with special bulletproof vests. She shares her home in South Carolina with her four dogs and a resident ghost named Mary Margaret. Visit her website at www.fernmichaels.com.|||
Lori Foster is a USA Today, Publishers Weekly, and New York Times bestselling author. She has received the Romantic Times “Career Achievement Award” for Series Romantic Fantasy and for Contemporary Romance; Amazon’s top-selling romance title for Too Much Temptation; Amazon’s Top Ten editors’ picks in romance for Causing Havoc; the BGI group’s “Bestselling Original Contemporary” romance for The Secret Life of Bryan, “Bestselling Romantic Comedy” for Jude’s Law, “Bestselling Romantic Suspense” for Back in Black; and Amazon’s #1 Editors’ Pick in Romance for Servant: The Acceptance. Lori has been featured as a clue in the New York Times crossword puzzle, and the USA Today “Quick Cross” puzzle. As well as writing a variety of romances in all lengths for multiple publishers, Lori has a successful urban fantasy series under the name L. L. Foster. Visit Lori at her website LoriFoster.com.
|||
CAROLYN BROWN is a New York Times, USA Today, Wall Street Journal, Publisher’s Weeklybestselling author as well as a #1 Amazon and #1 WashingtonPost bestselling author and a RITA finalist. She is the author of more than 100 novels and several novellas. A recipient of the Bookseller’s Best Award, Montlake Romance’s prestigious Montlake Diamond Award, and also a three-time recipient of the National Reader’s Choice Award, Brown’s novels have been translated into 20 foreign languages. Her books have been featured multiple times in Women’s World magazine. She and her husband, a retired English teacher, live in southern Oklahoma. They have three grown children and enough grandchildren to keep them young. Visit her at www.carolynbrownbooks.com.