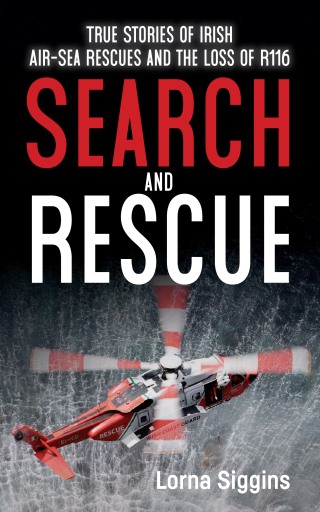 On 13 March 2017, the Rescue 116 crew of Capt. Dara Fitzpatrick, Capt. Mark Duffy, Paul Ormsby and Ciarán Smith took off from Dublin airport just after 2300 hours for a medical evacuation off the west coast. The first indication of disaster came when the crew failed to answer a radio call at 12.46 a.m. At 02.16 hours, sister helicopter Rescue 118 spotted a casualty and debris in the water. There would be no survivors from R116, and extensive searches failed to locate the bodies of two of the four crew. The crash occurred just six months after the loss of another experienced volunteer, Caitriona Lucas from Doolin Coast Guard in Co Clare; and 18 years after the loss of four Air Corps crew who were returning from a night rescue in thick fog off the south-east coast. In Search and Rescue, Lorna Siggins exposes the shocking systemic flaws that led to these tragic deaths, but also looks at successful rescues where, despite all the odds, the courage and dedication of members of the Irish Coast Guard and the volunteers who work with them have saved countless lives, including the dramatic rescue of paddleboarders Sara Feeney and Ellen Glynn off the coast of Clare in 2020.

Lorna Siggins: Lorna Siggins is a former Irish Times journalist and has been reporting from the west coast for over 20 years, focusing on marine affairs. She has reported from the first successful Irish expedition to Mount Everest, from Antarctica, from the African and south American continents, and is author of several books.