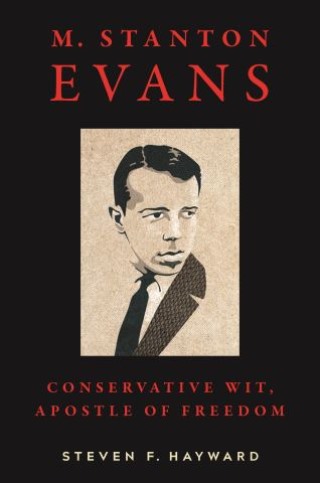 M. Stanton Evans (d. 2015) was one of the unsung heroes and key figures of the modern conservative movement, offering a model to be remembered and emulated in both thought and deed. A person of extraordinary breadth, he combined the roles of journalist, first-rank thinker, and political action, often at the center of crucial events for the conservative movement from the mid-1950s to his last decade in the 2010s. He was the principal author of the Sharon Statement, the founding document of Young Americans for Freedom. Evans was also a mentor to an entire generation of conservative writers and journalists, including Ann Coulter, John Fund, Martin Morse Wooster, Tim Carney, Richard Miniter, William McGurn, and this author.

Evans was libertarian in economics and policy, traditionalist in moral and social matters, respectful of religion, and resolutely anti-Communist. Over the years he wrote a number of elegant articles and one book (The Theme is Freedom) that reconciled many of the strains that often appear between these differing schools of conservative thought. He also wrote a controversial defense of Joseph McCarthy (Blacklisted by History), which is one of many examples of his fearlessness in contesting the conventional wisdom.

Beyond his professional profile, Stan was also known for his ironic dry wit, which only came out in person, as well as his personal modesty and kindliness, and fondness for fast-food, sports, and classic rock and roll music trivia. He was “the conservative for the common man.”

Steven F. Hayward is a resident scholar at UC Berkeley’s Institute of Governmental Studies and a visiting lecturer at Berkeley Law. He was previously the Ronald Reagan Distinguished Visiting Professor at Pepperdine University’s School of Public Policy. He is the author of six books, including The Age of Reagan: The Fall of the Old Liberal Order, 1964–1980, The Age of Reagan: The Conservative Counter-Revolution, 1980–1989, and Patriotism is Not Enough: Harry Jaffa, Walter Berns, and the Arguments That Redefined American Conservatism. He writes daily on Powerlineblog.com, one of the nation's most read political websites.