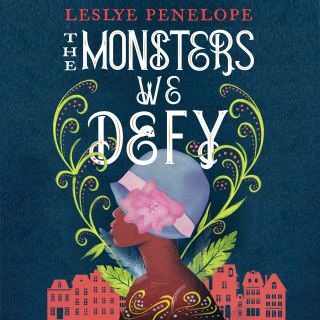 The Monsters We Defy

A woman able to communicate with spirits must assemble a ragtag crew to pull off a daring heist to save her community in this timely and dazzling historical fantasy that weaves together African American folk magic, history, and romance.

Clara Johnson talks to spirits, a gift that saved her during her darkest moments in a Washington D. C. jail. Now a curse that’s left her indebted to the cunning spirit world. So, when the Empress, the powerful spirit who holds her debt, offers her an opportunity to gain her freedom, a desperate Clara seizes the chance. The task: steal a magical ring from the wealthiest woman in the District.

Clara can’t pull off this daring heist alone. She’ll need help from an unlikely team, from a jazz musician capable of hypnotizing with a melody to an aging vaudeville actor who can change his face, to pull off the impossible. But as they encounter increasingly difficult obstacles, a dangerous spirit interferes at every turn. Conflict in the spirit world is leaking into the human one and along D.C’.s legendary Black Broadway, a mystery unfolds—one that not only has repercussions for Clara but all of the city’s residents.

Leslye Penelope: Leslye Penelope has been writing since she could hold a pen and loves getting lost in the worlds in her head. She is an award-winning author of fantasy and paranormal romance. Equally left and right-brained, she studied filmmaking and computer science at Howard University and sometimes dreams in HTML. She hosts the My Imaginary Friends podcast and lives in Maryland with her husband and furry dependents.