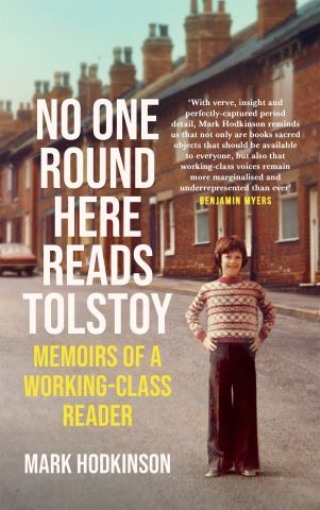 No One Round Here Reads Tolstoy

Memoirs of a Working-Class Reader

Mark Hodkinson grew up among the terrace houses of Rochdale in a house with just one book. His dad kept it on top of a wardrobe with other items of great worth – wedding photographs and Mark’s National Cycling Proficiency certificate. If Mark wanted to read it, he was warned not to crease the pages or slam shut the covers. Today, Mark is an author, journalist and publisher. He still lives in Rochdale, but is now snugly ensconced (or is that buried?) in a ‘book cave’ surrounded by 3,500 titles – at the last count. No One Round Here Reads Tolstoy is his story of growing up a working-class lad during the 1970s and 1980s. It’s about schools (bad), music (good) and the people (some mad, a few sane), and pre-eminently and profoundly the books and authors (some bad, mostly good) that led the way, and shaped his life. It’s also about a family who just didn’t see the point of reading, and a troubled grandad who, in his own way, taught Mark the power of stories. In recounting his own life-long love affair with books, Mark also tells the story of how writing and reading has changed over the last five decades, starting with the wave of working-class writers in the 1950s and 60s, where he saw himself reflected in books for the first time.

Mark Hodkinson: Mark Hodkinson has written for The Times for two decades, three years as a columnist. He has also contributed to the Observer, Guardian, Mail on Sunday and others. He is the author of Blue Moon: Down Among the Dead Men with Manchester City, which is regularly cited as a football classic, and Believe in the Sign, which was longlisted for the William Hill Sports Book of the Year. His novels include The Last Mad Surge of Youth, which was nominated as Q’s Novel of the Year, and That Summer Feeling. He owns Pomona Books and has published titles by Simon Armitage, Barry Hines, Ian McMillan, Ray Gosling, Stuart Murdoch (of Belle and Sebastian), Bob Stanley (Saint Etienne) and many more. He also commissioned and edited the much-acclaimed biography J.D. Salinger: A Life, which was made into a film starring Nicholas Hoult. markhodkinson.com