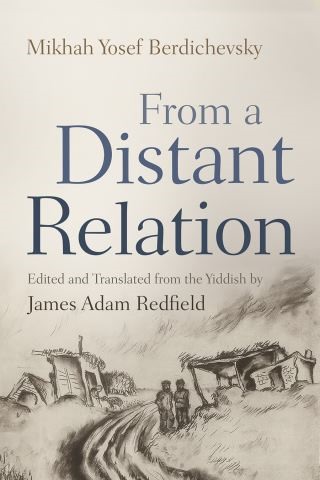 From a Distant Relation

In his short life (1865–1921), Mikhah Yosef Berdichevsky was a versatile and influential man of letters: an innovative Hebrew prose stylist; a collector of Jewish folklore; a scholar of ancient Jewish and Christian history. He was at once a peer of Friedrich Nietzsche, the Brothers Grimm, and a diverse circle of Jewish writers in the Russian Empire and German-speaking countries. As a Yiddish writer, however, he remains unknown to gen­eral readers. Written in 1902-1906, but not published in full until the 1920s, his stories were dismissed by prominent critics and viewed as out of step with the literary taste of his own time. Yet these vivid portraits of a small Jewish town (shtetl) in the southern Russian Empire can speak powerfully to new audiences today.

With enchanting humor, social satire, and verbal dexterity, From a Distant Relation captures the world of the shtetl in a sharp realist prose style. Themes of repressed desire, poverty, relations with non-Jews, and historic upheavals echo in a cast of memorable characters. Many of the stories and monologues feature strong female protago­nists, while others shed light on misogyny in the culture of the shtetl. At the border between fiction and reportage, with a gritty underbelly and a deceptive naïveté, Berdichevsky’s stories explore dynamics of wealth, power, and gender in an intimate setting that resonates profoundly with contemporary Jewish life.

Mikhah Yosef Berdichevsky was one of the most important European Jewish intellectuals of his time. He was a well-known translator and editor of Jewish folklore in both Hebrew and German.

James Adam Redfield is assistant professor of Biblical and Talmudic Literatures in the Department of Theological Studies at Saint Louis University and visiting assistant professor at the University of Chicago Divinity School. His edition and translation of From a Distant Relation was the result of his 2016 Yiddish Book Center translation fellowship.