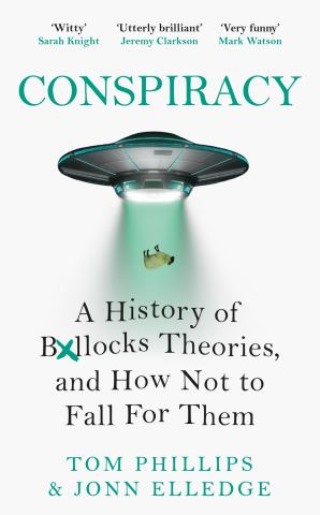 A History of Boll*cks Theories, and How Not to Fall for Them

'Uproarious . . . [Phillips and Elledge] pair the abundant good humour of this book with a warning about the corrosive effects of conspiracy theories' The Times

From the Satanic Panic to the anti-vaxx movement, the moon landing to Pizzagate, it's always been human nature to believe we're being lied to by the powers that be (and sometimes, to be fair, we absolutely are).

But while it can be fun to indulge in a bit of Deep State banter on the group chat, recent times have shown us that some of these theories have taken on a life of their own - and in our dogged quest for the truth, it appears we might actually be doing it some damage.

In Conspiracy, Tom Phillips and Jonn Elledge take us on a fascinating, insightful and often hilarious journey through conspiracy theories old and new, to try and answer a vital question for our times: how can we learn to log off the QAnon message boards, and start trusting hard evidence again?

Praise for the Brief History series:

'Witty, entertaining and slightly distressing... You should probably read it' Sarah Knight, author of The Life-Changing Magic of Not Giving a F*ck

'Both readable and entertaining' Telegraph

Tom Phillips is the editor of Full Fact, Britain's leading independent fact-checking organisation. Previously he was the editorial director of BuzzFeed UK, where he divided his time between very serious reporting on important issues... and making jokes.

|||Jonn Elledge is a regular contributor to the Big Issue and the New Statesman, a less regular contributor to other titles such as the Guardian and Wired, and an almost constant contributor to the weekly Newsletter of (Not Quite) Everything. He was previously assistant editor of the New Statesman, where he was responsible for launching and editing the urbanism site CityMetric, hosting the Skylines podcast and writing a lot of angry columns about the housing crisis. He lives in the East End of London, where he has probably spent more time thinking about tube station naming conventions than is strictly speaking healthy.