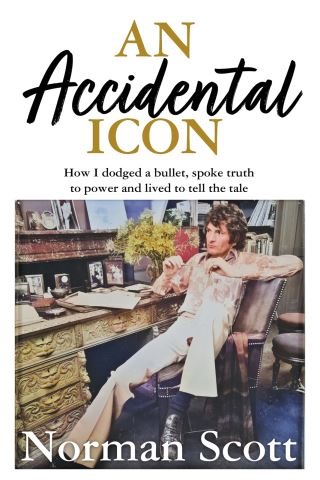 How I dodged a bullet, spoke truth to power and lived to tell the tale

'Compelling' The Daily Mail
'So many gripping moments... a real cracker' The Evening Standard

The jaw-dropping and inspiring story of accidental queer icon Norman Scott (the hero of TV drama A Very English Scandal) and the part he played in one of the greatest political scandals of the 20th century.

In October 1975 an assassin tried to murder Norman Scott on Exmoor but the trigger failed and he only succeeded in shooting Scott's beloved dog, Rinka. Scott subsequently found himself at the centre of a major political scandal and became an unlikely queer icon. But this was never his intention...

He was born in 1940 into a poor, dysfunctional and abusive family. Aged sixteen he began an equestrian career, animals having been the one source of comfort in his childhood. By the age of twenty he had run into debts and had suffered a nervous breakdown.

In 1960 Scott began a sexual affair with Jeremy Thorpe. By the time of the attempted assassination of Scott, Thorpe was married, leader of the Liberal Party and a figure at the heart of the establishment. He was embarrassed by their former relationship and wanted to cover it up. But he failed. The assassination attempt culminated in a sensational trial in 1979, where Thorpe was tried for conspiracy to murder. The press labelled Scott a madman and the establishment protected Thorpe, who was acquitted. Only recently has Scott's version of events been vindicated.

An Accidental Icon tells a story that is inspiring and jaw droppingly unbelievable: it is the tale of the courage and survival of one man who took on the establishment

Norman Scott: Norman Scott was born in 1940 and sent to a remand home as a teenager after he was accused of stealing a bale of hay and a saddle. He is most well known for his part in the Jeremy Thorpe scandal of 1979, but he has also been a successful model and equestrian instructor. He lives on Dartmoor. This is his first book.