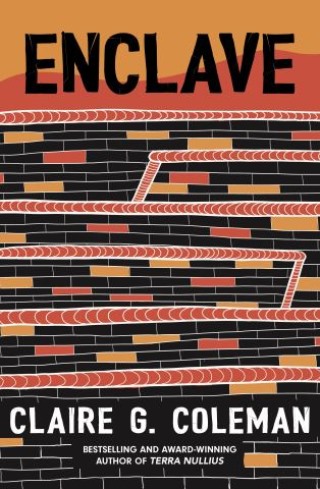 'These are troubling times. The world is a dangerous place,' the voice of the Chairman said. 'I can continue to assure you of this: within the Wall you are perfectly safe.'

Christine could not sleep, she could not wake, she could not think. She stared, half-blind, at the cold screen of her smartphone. She was told the Agency was keeping them safe from the dangers outside, an outside world she would never see.

The enclave was the only world she knew, the world outside was not safe. Staying or leaving was not a choice she had the power to make. But then Christine dared start thinking . . . and from that moment, danger was everywhere.

In our turbulent times, Claire G. Coleman's Enclave is a powerful dystopian allegory that confronts the ugly realities of racism, homophobia, surveillance, greed and privilege and the self-destructive distortions that occur when we ignore our shared humanity.

'Much of this novel feels frighteningly plausible ... Coleman's world shimmers on the page like a heat haze' ARTS HUB

'If you liked Margaret Atwood's The Handmaid's Tale or Charlotte Woods' The Natural Way of Things, this one is clearly for you' SYDNEY MORNING HERALD

'Enclave is a novel that inclines towards hope ... offers us an alternative: a world in which people, in meeting the demands of the present with curiosity, courage and conviction, can bring about a more just and inclusive future' NEW DAILY

'Coleman can turn a deft phrase ... She writes a mean chase sequence, ramping up the suspense when she wants, with fight scenes and great narrative propulsion' THE AGE

'Coleman offers an urgent critique of bigotry and, implicitly, of colonialism, writing with conviction about the ways technology can be misused by those in power, but also how it might be deployed for good. Indeed, despite its dystopian tenor, Enclave is ultimately a hopeful novel, and one which suggests it is far from futile to aspire to a better future' MANJIMUP-BRIDGETOWN TIMES

'She is toying with the canon, but also placing menacing signposts of the unsustainability of the settlement's brutal, exclusionary politics. Enclave is a clarion shout against demonising the unfamiliar, and the temptation to withdraw into a bubble' THE GUARDIAN

Claire G. Coleman: Claire G. Coleman is a Noongar writer, born in Western Australia, and now based in Naarm. Her family have been from the area around Ravensthorpe and Hopetoun on the south coast of WA since before time started being recorded. Claire wrote her black&write! Fellowship-winning book Terra Nullius while travelling around Australia in a caravan. The Old Lie (2019) was her second novel and in 2021 her acclaimed non-fiction book, Lies Damned Lies was published by Ultimo Press. Enclave is her third novel.