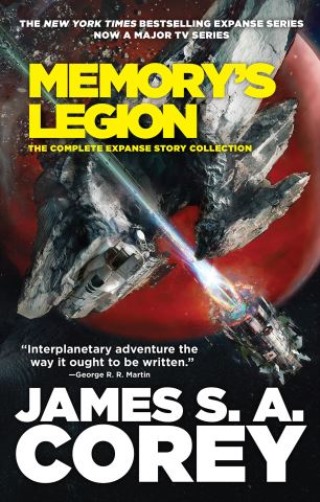 From Leviathan Wakes to Leviathan Falls, James S. A. Corey's Hugo Award-winning Expanse series has redefined modern space opera. Now, available in print for the first time comes the complete collection of short fiction set in the Expanse universe, including both a brand-new novella set after the events of Leviathan Falls and author’s notes on each story.

On Mars, a scientist experiments with a new engine that will one day become the drive that fuels humanity's journey into the stars.

On an asteroid station, a group of prisoners are oblivious to the catastrophe that awaits them.

On a future Earth beset by overpopulation, pollution, and poverty, a crime boss desperately seeks to find a way off planet.

On an alien world, a human family struggles to establish a colony and make a new home.

All these stories and more are featured in this unmissable collection of short fiction set in the hardscrabble world of The Expanse.

Contents:
The Expanse Short Fiction
Drive
The Butcher of Anderson Station
The Churn
Gods of Risk
The Vital Abyss
Strange Dogs
Auberon
The Sins of our Fathers
---
For more from James S. A. Corey, check out:

James S. A. Corey is the pen name of Daniel Abraham and Ty Franck. In addition to writing the novels and short stories of The Expanse, they wrote and produced the television series of the same name. Daniel lives with his family in the American southwest. Ty will tell you where he lives when and if he wants you to come over.