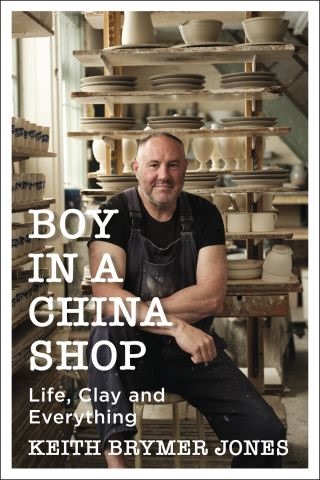 Boy in a China Shop

Life, Clay and Everything

'During downtime on the pottery throwdown Keith made my hair curl with some of his tales - he's a great raconteur and recounts his story in this book as he does in real life - with joy, charm & mischief.' - Sara Cox

'Fans of Throw Down will enjoy this warm autobiography.' - Daily Mail

'An engaging read by an endearing, unassuming man who has always stayed true to his passions.' - Daily Mirror

Ballet dancer. Front man in an almost famous band. Judge on The Great Pottery Throwdown. How did all that happen?
By accident mostly. But I always say we make our own luck. What if an art teacher hadn't given me a lump of clay? What if the band had been really successful? What if I hadn't taken a photograph of a bowl to the buyer at Heals in London? What if she'd hated it? Or hadn't seen it... What if I hadn't agreed to dress up as Adele to make a crazy YouTube video?
Every chapter of my book is based around an object (usually a pot) that's been significant in my life. It's just a trigger to let me go off in a lot of different directions and tell a few stories. A lot of stories. Dyslexia. The art teacher who changed my life. My Mother. My Father. A life-changing job interview with a man who lay under his car throughout. That video.
Sifting through half-forgotten memories, trying to pick out the golden nuggets from the stuff that is definitely dross has been a curious, and at times hilarious, sometimes sad, but definitely enlightening process. So here it is - my pottery life with some very loud music and some pretty good dancing. And a lot of throwing, fettling and firing.
Oh ...and a good dose of anxiety.

Keith Brymer Jones is a British potter and ceramic designer, internationally known for his homeware 'Word' range and celebrated as the lead judge on The Great Pottery Throwdown, Love Productions television series for Channel Four and HBO. In February 2021, the Evening Standard described him as 'Quite simply the best person on TV at this present moment in time'.

After an apprenticeship at Harefield Pottery, he started hand-making ceramics for retailers including the Conran Group, Habitat, Barneys New York, Monsoon, Laura Ashley and Heals. As Head of Design for MAKE International he collaborates with other designers including Jane Foster, Scion Living, Hokolo and Becky Baur.