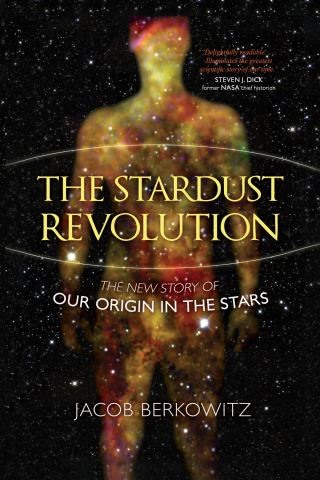 The New Story of Our Origin in the Stars

In 1957, as Americans obsessed over the launch of the Soviet Sputnik satellite, another less noticed space-based scientific revolution was taking off. That year, astrophysicists solved a centuries-old quest for the origins of the elements, from carbon to uranium. The answer they found wasn’t on Earth, but in the stars. Their research showed that we are literally stardust. The year also marked the first conference that considered the origin of life on Earth in an astrophysical context. It was the marriage of two of the seemingly strangest bedfellows—astronomy and biology—and a turning point that award-winning science author Jacob Berkowitz calls the Stardust Revolution.

In this captivating story of an exciting, deeply personal, new scientific revolution, Berkowitz weaves together the latest research results to reveal a dramatically different view of the twinkling night sky—not as an alien frontier, but as our cosmic birthplace. Reporting from the frontlines of discovery, Berkowitz uniquely captures how stardust scientists are probing the universe’s physical structure, but rather its biological nature. Evolutionary theory is entering the space age.

From the amazing discovery of cosmic clouds of life’s chemical building blocks to the dramatic quest for an alien Earth, Berkowitz expertly chronicles the most profound scientific search of our era: to know not just if we are alone, but how we are connected. Like opening a long-hidden box of old family letters and diaries, The Stardust Revolution offers us a new view of where we’ve come from and brings to light our journey from stardust to thinking beings.

JACOB BERKOWITZ is the bestselling author of Jurassic Poop: What Dinosaurs (and Others) Left Behind, winner of a 2007 American Institute of Physics Science Writing Award. His book Out of This World: The Amazing Search for an Alien Earth was selected as a SkyNews best astronomy book for 2009. He has written for the Globe and Mail, is a former Dibner Fellow in the History of Science (Huntington Library) and is a writer-in-virtual residence at the Institute for Science, Society and Policy, University of Ottawa. www.jacobberkowitz.com