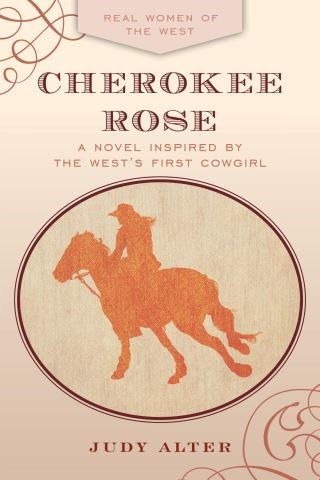 A Novel Inspired by the West's First Cowgirl

Tommy Jo Burns knew she was destined for greatness. Raised on an Oklahoma ranch where her father taught her to rope and ride, at fourteen she so impressed President Teddy Roosevelt that he dubbed her America's first cowgirl. Filled with dreams of joining a Wild West show, she left her parents to create her own family of friends on the road with Colonel Zack Miller's 101 Ranch Show. It was a new and exciting life, so she took a new name: Cherokee Rose.

Cherokee Rose's adventures brought many different men into her life. She could rope with the best of them, and she tangled with a few: the awkward ranch hand, Bill Rogers, who emerged on the show circuit as famed entertainer Will Rogers; a handsome husband who resented her fame; a wealthy gambler who broke her heart. Filled with the excitement of the unconventional, Cherokee Rose captures the essence of women cowgirls and nineteenth-century Wild West shows.

Cherokee Rose was inspired by the life of America’s real first cowgirl, Lucille Mulhall, and named after the flower that grows wild on the prairies of the Southwest.

Judy Alter is the award-winning author of over a hundred books, fiction and nonfiction for both adults and young adults. She has won awards from Western Writers of America, the National Cowboy Hall of Fame, and the Texas Institute of Letters and has been inducted into the Western Writers of America Hall of Fame and the Texas Literary Hall of Fame. A native of Chicago, Alter has lived in Texas for over fifty years and makes her home in Fort Worth.