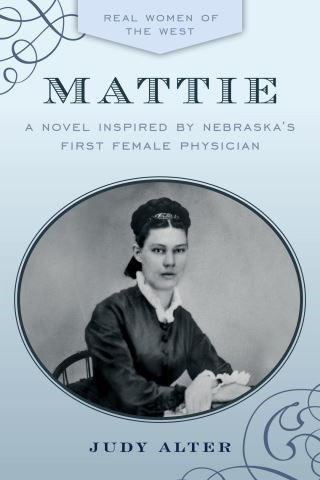 The daughter of a fallen woman, Mattie Armstrong might have lived a life of poverty and failure. But with determination and courage, Mattie escaped her gossiping neighbors and her loneliness to become the first woman enrolled in the medical school in Omaha and then the state’s first doctor on the vast prairies of western Nebraska.

Set against the backdrop of that sparsely settled land at the turn of the twentieth century, Mattie tells the story of a pioneer woman physician. She learned to “read the prairie” and often traveled hours to deliver a baby or pull an aching tooth or set a broken limb. She found romance and disappointment, battles won and loved ones lost, challenges met and opportunities passed. As the years passed, her life took on a richness and quality she would not have found anywhere else or at any other time.

Inspired by the life of Dr. Georgia Arbuckle Fix, Nebraska's first female physician, Mattie offers a realistic and haunting portrait of life on the plains and of a most unforgettable woman.

Judy Alter is the award-winning author of over a hundred books, fiction and nonfiction for both adults and young adults. She has won awards from Western Writers of America, the National Cowboy Hall of Fame, and the Texas Institute of Letters and has been inducted into the Western Writers of America Hall of Fame and the Texas Literary Hall of Fame. A native of Chicago, Alter has lived in Texas for over fifty years and makes her home in Fort Worth.

Mattie won a Spur Award from Western Writers of America as the Best Western Novel of 1988.