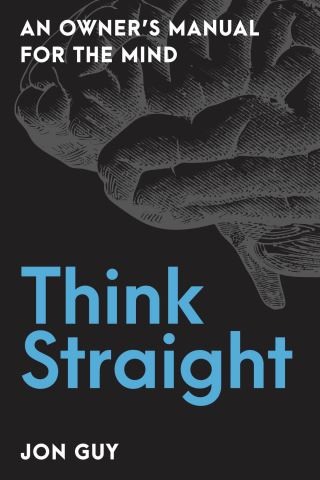 An Owner's Manual for the Mind

Put simply, Think Straight is an owner’s manual for the human brain. Drawing from the vast history of scientific and cognitive research, this book is a tour de force through the science and philosophy of the human mind, and what it means to think as a rational human being in the 21st century. Our world is awash in mis- and disinformation, baseless conspiracy theories, New Age ideology, anti-science propaganda, and all manner of magical thinking. Pseudo-experts fill the airwaves with false and bogus claims, news media twist and spin information to suit their ends, celebrities and corporations push evidence-free beliefs on their followers, and politicians continue to mislead the masses with false promises and bad thinking. In careful detail, author Jon Guy investigates the art of thinking critically, offering readers the ability to empower themselves and our society at large.

In order to think critically, we must also learn what it means to know, what knowledge is, how to investigate, how to question, and how everything from computer algorithms written by geniuses to psychological traits embedded in us from our evolutionary origins conspire to construct a model of reality that we have much reason to doubt.

The human mind is not only the most powerful and complex structure ever discovered, it is also riddled with a host of flaws, shortcomings, errors, and limitations, most of which none of us are ever made aware of. Critical thinking is the ability to both capitalize on the strengths and power of human cognition, as well as understand and combat the error-prone nature of our brains. Think Straight encourages us to accept that not everything we think is true and explores how we can compensate for the many errors of our minds.

Backed by the best available research and data, and written in clear and decisive language, Think Straight provides readers with the proper guidance and tools to improve your thinking, inform your decisions, avoid fraud and deceit, and make the world a better place to live and prosper.

Jon Guy is a self-taught skeptic who brings one of the most thorough and comprehensive treatments of critical thinking to his new book Think Straight. His mastery of the topic and unique talent for communicating science and philosophy shine throughout his detailed examination of the thinking process.

As a former prisoner, Jon Guy found both solace and escape from the confines of his prison walls by spending years studying science and philosophy. His ability to grasp the complex nature of some of the worlds most complicated topics and translate them into language everyone can understand is one rarely seen outside of mainstream academia.