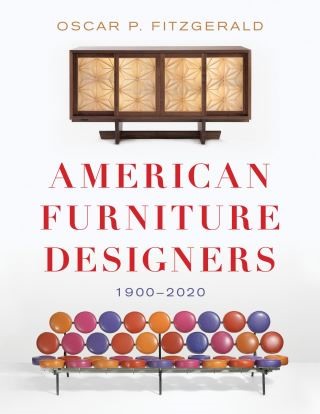 The 20th century furniture is hot. American Furniture Designers: 1900 to the Present highlights the furniture produced by the 20 most important American furniture designers of the 20th and early 21st centuries plus a selection of the best-known European designers whose work is sold by Knoll International and Herman Miller. The designers are organized into five chapters. Introductions to each section summarize the evolution of furniture design as it evolved through the 20th and early 21st centuries. The book begins with the Arts and Crafts era before World War I; moves into the interwar period when Modernism gained a foothold in America; continues through the Postwar heyday of Mid-century Modern; highlights the furniture from the 1970s and into the 21st century with a focus on the foremost promoters of modern furniture, Knoll International and Herman Miller; and concludes with a selection of the top Studio Furniture makers and their innovative creations.

The book focuses on the leading American designers from each of these periods including Gustav Stickley and Charles Rohlfs during the Arts and Crafts movement, Paul Frankl and Gilbert Rohde in the interwar period, Charles and Ray Eames and George Nelson for Mid- century Modern, and Wendell Castle and George Nakashima for Studio Furniture to name just a few. All their furniture is explained and profusely illustrated with 280 color photos.

For anyone curious about the modern material culture that surrounds them, the book will explain everything about American furniture from 1900 into the 21st century: when it was made, where it was made, who made it, what it was made of, how it was designed, how long it was in production, and how the furniture related to its contemporaries.

Oscar P. Fitzgerald, PhD is a nationally known historian, author, lecturer, and consultant on American furniture from colonial times to the present. As a member of the faculty of the Smithsonian Institution/George Washington University Decorative Arts and Design History Masters Program, he teaches all the furniture classes He has shared his passion for furniture with audiences nationwide, including a number of certification seminars for appraisers. Recently, he presented a program on identifying Mid-century Modern furniture fakes at the annual conference of the International Society of Appraisers. His latest publication is the definitive American Furniture: 1650 to the Present.