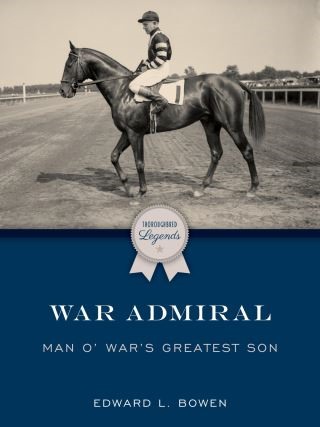 Man o' War didn't compete in the1920 Kentucky Derby because owner Sam Riddle thought the distance was too long for a young three-year-old. But nearly two decades later, Riddle had a change of heart. In 1937, he agreed to run War Admiral, a son of the great Man o' War, at Churchill Downs. War Admiral went on to sweep the Triple Crown and established himself as Man o' War's best racing son. Veteran racing historian Edward L. Bowen, biographer of Man o' War, chronicles the exploits of War Admiral, including the colt's historic battle with the great Seabiscuit and War Admiral's success at stud.

Edward L. Bowen is the author of more than twenty books on Thoroughbred racing history. He was a staff member of the weekly trade publication The Blood Horse for some thirty years, including seventeen as managing editor and five as editor-in-chief. He was also editor of The Canadian Horse for two years. Bowen served as president of the Grayson-Jockey Club Research Foundation from 1994 through 2018. Bowen has received various honors within the world of Thoroughbred and sports journalism and authorship, including an Eclipse Award for magazine writing, the Charles Engelhard Award from the Kentucky Thoroughbred Association, the Old Hilltop Award from Pimlico Race Course, the Walter Haight Award from the National Turf Writers Association, and the gold medal designation in Foreword's sports category.