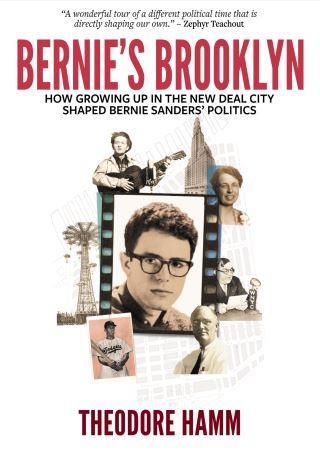 Bernie Sanders’ tilt at the US presidency has come under fire from an establishment that derides his social democratic policies as alien to the American way. But, as Ted Hamm reveals in this engaging and concise history, the sort of socialism Bernie advocates was commonplace in the Brooklyn where he grew up in the 1940s and 50s.

Policies like free college tuition, rent control, and infrastructure projects including extensive public housing, parks and swimming pools were part of the New Deal city run by a progressive Mayor, Fiorello La Guardia, and supported by FDR and Eleanor Roosevelt. While Arthur Miller, resident in Brooklyn Heights, was staging Death of a Salesman, a play with which Bernie’s dad closely identified, Woody Guthrie was penning his paeans to the American worker in Coney Island and Jackie Robinson was breaking the color bar on Ebbets Field in a Dodgers team yet to be relocated in California.

Drawing deeply on interviews with his brother and friends, and delving skillfully into the history of the borough, Bernie’s Brooklyn shows how, far from being an anomaly in US politics, Sanders’ 2020 platform is rooted firmly in the progressivism of the New Deal.

Theodore Hamm is editor of Frederick Douglass in Brooklyn. He writes about New York City politics and culture for The Indypendent and Jacobin. Hamm is chair of journalism and new media studies at St. Joseph’s College in Clinton Hill, Brooklyn.