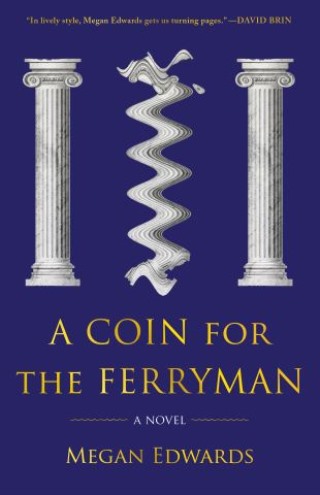 A Coin for the Ferryman

The story can now be told. In 1999, an elite interdisciplinary team headed by Nobel laureate Andrew Danicek gathered in California to carry out a ground-breaking time-travel experiment. While the rest of the world remained unaware, Julius Caesar was successfully transported from the last day of his life to a specially-constructed covert facility. Four days of conversation with historians and Latin scholars were planned, followed by Caesar’s return to the moment from which he was extracted. But despite the team’s meticulous efforts to maintain secrecy and plan for all possible exigencies, a kidnap attempt plunges Caesar into peril. Fully aware that the future of civilization may hang in the balance, one team member must summon strength she didn’t know she possessed to return Caesar to the Ides of March. The shocking details of Caesar's visit and its effect on subsequent events have been protected by draconian nondisclosure agreements....until now.

Megan Edwards: Megan Edwards is the author of the travel memoir “Roads from the Ashes,” the humor book “Caution: Funny Signs Ahead,” two Copper Black mystery novels “Getting off on Frank Sinatra” and “Full Service Blonde” and a romantic novel “Strings.” She has lived and traveled extensively in Europe and spent nearly seven years “on the road” all over North America. Now at home in Las Vegas, Nevada, she is working on "Graveyard Bowling" the 3rd novel in the Copper Black series.