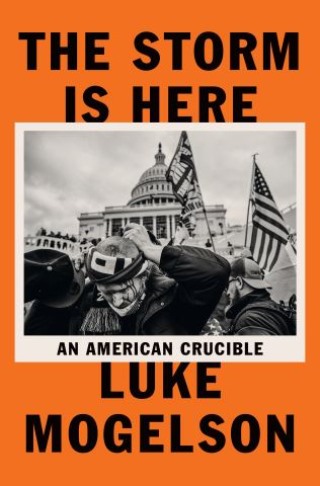 The Storm Is Here

The New Yorker's award-winning war correspondent returns to his own country to chronicle its accelerating civic breakdown, in an indelible eyewitness narrative of startling explanatory power

After years of living abroad and covering the Global War on Terrorism, Luke Mogelson went home in early 2020 to report on the social discord that the pandemic was bringing to the fore across the US. An assignment that began with right-wing militias in Michigan soon took him to an uprising for racial justice in Minneapolis, then to antifascist clashes in the streets of Portland, and ultimately to an attempted insurrection in Washington, D.C. His dispatches for The New Yorker revealed a larger story with ominous implications for America. They were only the beginning.

This is the definitive eyewitness account of how—during a season of sickness, economic uncertainty, and violence—a large segment of Americans became convinced of the need to battle against dark forces plotting to take their country away from them. It builds month by month, through vivid depictions of events on the ground, from the onset of COVID-19 to the attack on the US Capitol—during which Mogelson followed the mob into the Senate chamber—and its aftermath. Bravely reported and beautifully written, The Storm Is Here is both a unique record of a pivotal moment in American history and an urgent warning about those to come.

Luke Mogelson: Luke Mogelson has written for The New Yorker since 2013, covering the wars in Afghanistan, Syria, Ukraine, and Iraq. During the pandemic, he reported from across the U.S. Previously, Mogelson was a contributing writer for The New York Times Magazine, based in Kabul. He has won two National Magazine Awards and two George Polk Awards.