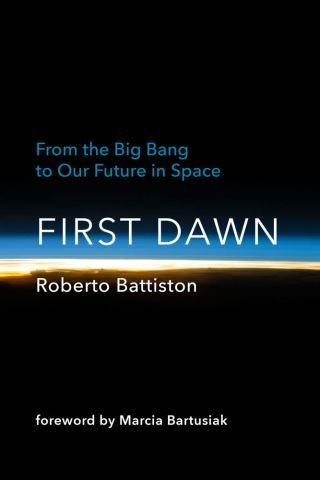 From the Big Bang to Our Future in Space

From the very first moments of the universe to the birth of the first star, our solar system, and our planet: a physicist traces the known and the unknown.

Since the beginning of the twentieth century, the horizon of our knowledge about the universe has expanded to encompass the infinitesimally small—and the infinitely vast. In First Dawn, physicist Roberto Battiston takes readers on a journey through space and time, to the boundaries of our knowledge and beyond. From the violence of the Big Bang and the birth of the first star, hundreds of millions of years later, to the emergence of our solar system, the dawn of life on Earth, and the possibility of life on other planets, Battiston maps what we know about the universe and how we came to know it—cautioning us, however, that what we know is a minuscule fraction of what there is to know.

Battiston outlines discoveries by some of the greatest theoretical physicists of the twentieth century, including Einstein, Bohr, Schrödinger, Heisenberg, Fermi, and Hubble; discusses the mysteries of dark energy and dark matter; and considers what it means for the universe to have emerged out of nothing. The ignition of the first star illuminated a universe that had been expanding, unobserved and unobservable, in the dark. Drawing on his own research, Battiston discusses the birth of the Sun, the formation of planets, the origins of life, interstellar migrations, extrasolar planets, black holes, gravitational waves, and much more. But, he warns, for some questions—the dimensions of the universe, for example, or the existence of other universes—we are destined to remain in the realm of speculation.

Roberto Battiston: Roberto Battiston is a physicist who specializes in the field of experimental fundamental and elementary particles physics, both at particle accelerators and in space. He is the author of A Dialogue between an Artist and a Scientist, Quantum Mechanics for Dummies, Making Space, and The Mathematics of the Virus.