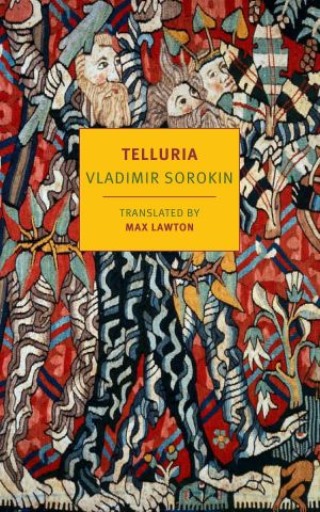 In the warring, neo-feudal society of this cross-genre novel for fans of Cormac McCarthy and William Gibson, the greatest treasure is a dose of tellurium—a magical drug administered by a spike through the brain.

Telluria is set in the future, when a devastating holy war between Europe and Islam has succeeded in returning the world to the torpor and disorganization of the Middle Ages. Europe, China, and Russia have all broken up. The people of the world now live in an array of little nations that are like puzzle pieces, each cultivating its own ideology or identity, a neo-feudal world of fads and feuds, in which no one power dominates. What does, however, travel everywhere is the appetite for the special substance tellurium. A spike of tellurium, driven into the brain by an expert hand, offers a transforming experience of bliss; incorrectly administered, it means death.

The fifty chapters of Telluria map out this brave new world from fifty different angles, as Vladimir Sorokin, always a virtuoso of the word, introduces us to, among many other figures, partisans and princes, peasants and party leaders, a new Knights Templar, a harem of phalluses, and a dog-headed poet and philosopher who feasts on carrion from the battlefield. The book is an immense and sumptuous tapestry of the word, carnivalesque and cruel, and Max Lawton, Sorokin’s gifted translator, has captured it in an English that carries the charge of Cormac McCarthy and William Gibson.

Vladimir Sorokin: Vladimir Sorokin was born in a small town outside of Moscow in 1955. He trained as an engineer at the Moscow Institute of Oil and Gas but turned to art and writing, becoming a major presence in the Moscow underground of the 1980s. His work was banned in the Soviet Union, and his first novel, The Queue (available as an NYRB Classic), was published by the famed émigré dissident Andrei Sinyavsky in France in 1985. In 1992, Sorokin’s Their Four Hearts was short-listed for the Russian Booker Prize; in 1999, the publication of the controversial novel Blue Lard, which included a sex scene between clones of Stalin and Khrushchev, led to public demonstrations against the book and demands that Sorokin be prosecuted as a pornographer; in 2001, he received the Andrei Bely Award for outstanding contributions to Russian literature. His work has been translated into more than thirty languages. Sorokin is also the author of the screenplays for Moscow, The Kopeck, and 4, and of the libretto for Leonid Desyatnikov’s The Children of Rosenthal, the first new opera to be commissioned by the Bolshoi Theater since the 1970s. He has written numerous plays and short stories, including the O. Henry Award winner “Horse Soup,” which will appear in Red Pyramid, a volume of stories forthcoming from NYRB Classics. His most recent novel is Doctor Garin. He lives in Vnukovo and Berlin.

Max Lawton is a novelist, musician, and translator. His translations of Sorokin’s stories have appeared in The New Yorker and n+1. In addition to eight of Sorokin’s books, forthcoming from NYRB Classics and Dalkey Archive Press, he is translating two books by Jonathan Littell. He lives in New York City.