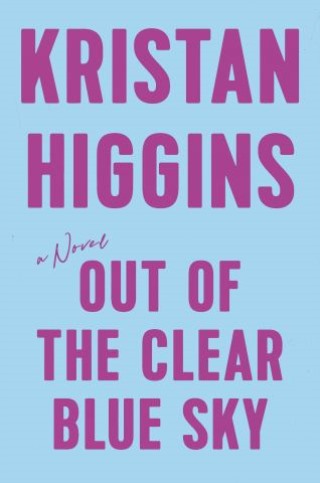 Out of the Clear Blue Sky

From New York Times bestselling author Kristan Higgins comes a funny and surprising new novel about losing it all—and getting back more than you ever expected.

Lillie Silva knew life as an empty nester would be hard after her only child left for college, but when her husband abruptly dumps her for another woman just as her son leaves, her world comes crashing down. Besides the fact that this announcement is a complete surprise (to say the least), what shocks Lillie most is that she isn’t heartbroken. She’s furious.

Lillie has loved her life on Cape Cod, but as a mother, wife, and nurse-midwife, she’s used to caring for other people . . . not taking care of herself. Now, alone for the first time in her life, she finds herself going a little rogue. Is it over the top to crash her ex-husband’s wedding dressed like the angel of death? Sure! Should she release a skunk into his perfect new home? Probably not! But it beats staying home and moping.

She finds an unexpected ally in her glamorous sister, with whom she’s had a tense relationship all these years. And an unexpected babysitter in, of all people, Ben Hallowell, the driver in a car accident that nearly killed Lillie twenty years ago. And then there’s Ophelia, her ex-husband’s oddly lost niece, who could really use a friend.

It’s the end of Lillie’s life as she knew it. But sometimes the perfect next chapter surprises you . . . out of the clear blue sky.

Kristan Higgins: Kristan Higgins is the New York Times, USA TODAY and Publishers Weekly bestselling author of more than twenty novels, which have been translated into more than two dozen languages and have sold millions of copies worldwide. Her books have received dozens of awards and accolades, including starred reviews from Entertainment Weekly, People, Kirkus, The New York Journal of Books, Publishers Weekly, Library Journal and Booklist.

The happy mother of two snarky and well-adjusted adults, Kristan enjoys gardening, mixology, the National Parks and complimenting strangers on their children. She lives in Connecticut with her heroic firefighter husband, cuddly dog and indifferent cat. Find her online at KristanHiggins.com, twitter.com/Kristan_Higgins, and facebook.com/KristanHigginsBooks.