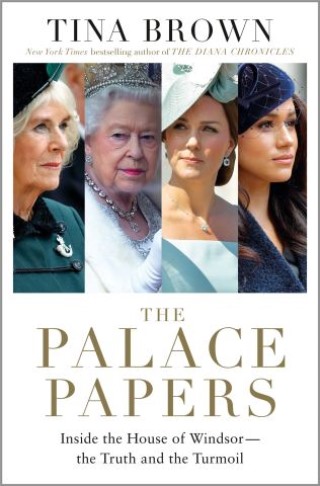 Inside the House of Windsor--the Truth and the Turmoil

NEW YORK TIMES BESTSELLER • The “addictively readable” (The Washington Post) inside story of the British royal family’s battle to overcome the dramas of the Diana years—only to confront new, twenty-first-century crises

“Brown is a deft and wily royal chronicler, marshaling a heavy arsenal of details into a wickedly edible narrative.”—Los Angeles Times

“Never again” became Queen Elizabeth II’s mantra shortly after Princess Diana’s tragic death. More specif­ically, there could never be “another Diana”—a mem­ber of the family whose global popularity upstaged, outshone, and posed an existential threat to the Brit­ish monarchy.

Picking up where Tina Brown’s masterful The Diana Chronicles left off, The Palace Papers reveals how the royal family reinvented itself after the trau­matic years when Diana’s blazing celebrity ripped through the House of Windsor like a comet.

Brown takes readers on a tour de force journey through the scandals, love affairs, power plays, and betrayals that have buffeted the monarchy over the last twenty-five years. We see the Queen’s stoic re­solve after the passing of Princess Margaret, the Queen Mother, and Prince Philip, her partner for seven decades, and how she triumphs in her Jubilee years even as family troubles rage around her. Brown explores Prince Charles’s determination to make Camilla Parker Bowles his wife, the tension between William and Harry on “different paths,” the ascend­ance of Kate Middleton, the downfall of Prince An­drew, and Harry and Meghan’s stunning decision to step back as senior royals. Despite the fragile monar­chy’s best efforts, “never again” seems fast approaching.

Tina Brown has been observing and chronicling the British monarchy for three decades, and her sweeping account is full of powerful revelations, newly reported details, and searing insight gleaned from remarkable access to royal insiders. Stylish, witty, and erudite, The Palace Papers will irrevoca­bly change how the world perceives and under­stands the royal family.

Tina Brown: Tina Brown is an award-winning writer, the former editor in chief of Tatler, Vanity Fair, and The New Yorker, and the founder of The Daily Beast and of the live event platform Women in the World. She is the author of the #1 New York Times bestseller The Diana Chronicles, and in 2017 she published The Vanity Fair Diaries, chosen as one of the best books of the year by Time, People, The Guardian, The Economist, Entertainment Weekly, and Vogue. In 2000 she was awarded the CBE (Commander of the British Empire) by Queen Elizabeth II for her services to journalism. She lives in New York City.