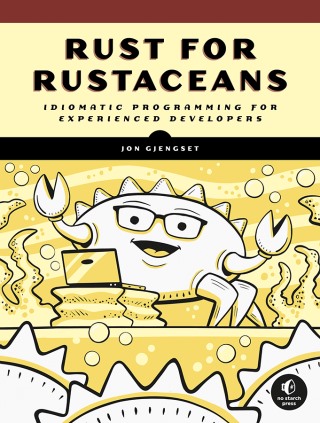 For developers who’ve mastered the basics, this book is the next step on your way to professional-level programming in Rust. It covers everything you need to build and maintain larger code bases, write powerful and flexible applications and libraries, and confidently expand the scope and complexity of your projects.

Author Jon Gjengset takes you deep into the Rust programming language, dissecting core topics like ownership, traits, concurrency, and unsafe code. You’ll explore key concepts like type layout and trait coherence, delve into the inner workings of concurrent programming and asynchrony with async/await, and take a tour of the world of no_std programming. Gjengset also provides expert guidance on API design, testing strategies, and error handling, and will help develop your understanding of foreign function interfaces, object safety, procedural macros, and much more.

You'll Learn:
•  How to design reliable, idiomatic, and ergonomic Rust programs based on best principles
•  Effective use of declarative and procedural macros, and the difference between them
•  How asynchrony works in Rust – all the way from the Pin and Waker types used in manual implementations of Futures, to how async/await saves you from thinking about most of those words
•  What it means for code to be unsafe, and best practices for writing and interacting with unsafe functions and traits
•  How to organize and configure more complex Rust projects so that they integrate nicely with the rest of the ecosystem
•  How to write Rust code that can interoperate with non-Rust libraries and systems, or run in constrained and embedded environments

Brimming with practical, pragmatic insights that you can immediately apply, Rust for Rustaceans helps you do more with Rust, while also teaching you its underlying mechanisms.

Jon Gjengset: Jon Gjengset has worked in the Rust ecosystem since the early days of Rust 1.0, and built a high-performance relational database from scratch in Rust over the course of his PhD at MIT. He’s been a frequent contributor to the Rust toolchain and ecosystem, including the asynchronous runtime tokio, and maintains several popular Rust crates, such as hdrhistogram and inferno. Jon has been teaching Rust since 2018, when he started live-streaming intermediate-level Rust programming. Since then, he’s made videos that cover advanced topics like async and await, pinning, variance, atomics, dynamic dispatch, and more, which have been received enthusiastically by the Rust community.

David Tolnay, who reviewed the book’s technical content, is a prolific, well-known, and respected contributor in the Rust ecosystem who maintains some of the most widely used Rust libraries, including syn, serde, and anyhow. He is also a member of the Rust library team.