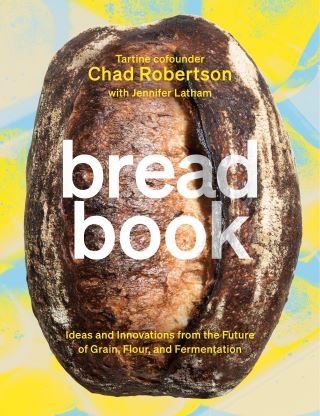 Ideas and Innovations from the Future of Grain, Flour, and Fermentation [A Cookbook]

Visionary baker Chad Robertson unveils what’s next in bread, drawing on a decade of innovation in grain farming, flour milling, and fermentation with all-new ground-breaking formulas and techniques for making his most nutrient-rich and sublime loaves, rolls, and more—plus recipes for nourishing meals that showcase them.

“The most rewarding thing about making bread is that the process of learning never ends. Every day is a new study . . . the possibilities are infinite.”—from the Introduction

More than a decade ago, Chad Robertson’s country levain recipe taught a generation of bread bakers to replicate the creamy crumb, crackly crust, and unparalleled flavor of his world-famous Tartine bread. His was the recipe that launched hundreds of thousands of sourdough starters and attracted a stream of understudies to Tartine from across the globe.

With sixteen brilliant formulas for naturally leavened doughs—including country bread (now reengineered), rustic baguettes, flatbreads, rolls, pizza, and vegan and gluten-free loaves, plus tortillas, crackers, and fermented pasta made with discarded sourdough starter—Bread Book is the wild-yeast baker ’s flight plan for a voyage into the future of exceptional bread.

Chad Robertson: Chad Robertson is the cofounder of Tartine, now with eight locations in Northern and Southern California and six in Seoul, South Korea. His foundational book, Tartine Bread, became the manual for home bread bakers who aspired to re-create his world-famous rustic country loaves and established him as the premier American bread baker. Robertson is also the coauthor of Tartine, written with Elisabeth Prueitt, and the author of Tartine Book No. 3. The recipient of the James Beard Award for Outstanding Pastry Chef, Robertson has appeared in a wide range of publications, from the New York Times to Vogue.

Jennifer Latham is Tartine’s director of bread and manages the bread-making teams in Northern and Southern California, collaborating with Robertson on innovations and techniques. She and Robertson cowrote and recorded the Getting Started with Sourdough audiobook.

Liz Barclay is a photographer, creative director, and visual artist with a passion for food, music, art, and culture. Her clients range from the New York Times, Vogue, and The New Yorker to Nowness, Nike, Capitol Music Group, and Apple. Barclay is also an ambassador and volunteer with CoachArt, Food Bank for New York City, and Edible Schoolyard Project.