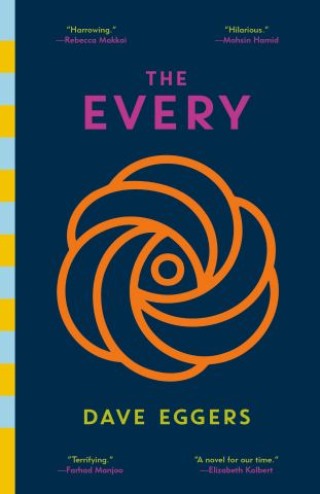 From the award-winning, bestselling author of The Circle comes an exciting new follow-up. When the world’s largest search engine/social media company, the Circle, merges with the planet’s dominant ecommerce site, it creates the richest and most dangerous—and, oddly enough, most beloved—monopoly ever known: the Every.

Delaney Wells is an unlikely new hire at the Every. A former forest ranger and unwavering tech skeptic, she charms her way into an entry-level job with one goal in mind: to take down the company from within. With her compatriot, the not-at-all-ambitious Wes Makazian, they look for the Every's weaknesses, hoping to free humanity from all-encompassing surveillance and the emoji-driven infantilization of the species. But does anyone want what Delaney is fighting to save? Does humanity truly want to be free?

Studded with unforgettable characters, outrageous outfits, and lacerating set-pieces, this companion to The Circle blends absurdity and terror, satire and suspense, while keeping the reader in apprehensive excitement about the fate of the company—and the human animal.

Dave Eggers: DAVE EGGERS is the author of many books, among them The Circle—the companion to the book you are holding—and also The Monk of Mokha, A Hologram for the King, What Is the What, and The Museum of Rain. He is the cofounder of 826 National, a network of youth writing centers, and Voice of Witness, an oral history book series that illuminates the stories of those impacted by human rights crises. He has been a finalist for the Pulitzer Prize, the National Book Award, and the National Book Critics Circle Award, and is the recipient of the Dayton Literary Peace Prize and the American Book Award. He has attended the JetPack Aviation academy in Moorpark, California, but is not yet certified to fly off-tether. Born in Boston and raised in Illinois, he has now lived in the San Francisco Bay Area for three decades. He and his family often consider leaving, but they do not leave.