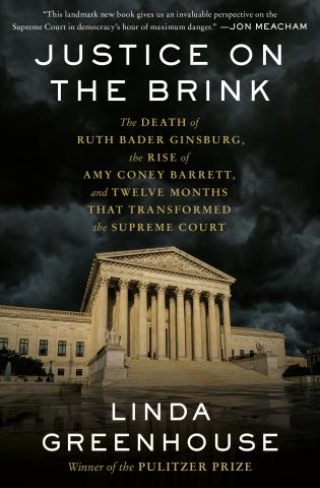 Justice on the Brink

A Requiem for the Supreme Court

The gripping story of the Supreme Court’s transformation from a measured institution of law and justice into a highly politicized body dominated by a right-wing supermajority, told through the dramatic lens of its most transformative year, by the Pulitzer Prize–winning law columnist for The New York Times

In Justice on the Brink, legendary journalist Linda Greenhouse gives us unique insight into a court under stress, providing the context and brilliant analysis readers of her work in The New York Times have come to expect. In a page-turning narrative, she recounts the twelve months when the court turned its back on its legacy and traditions, abandoning any effort to stay above and separate from politics. With remarkable clarity and deep institutional knowledge, Greenhouse shows the seeds being planted for the court’s eventual overturning of Roe v. Wade, expansion of access to guns, and unprecedented elevation of religious rights in American society. Both a chronicle and a requiem, Justice on the Brink depicts the struggle for the soul of the Supreme Court, and points to the future that awaits all of us.

Linda Greenhouse: Linda Greenhouse has reported on and written about the Supreme Court for The New York Times for more than four decades, earning numerous accolades, including a Pulitzer Prize. She currently writes an opinion column on the court and teaches at Yale Law School. She lives in New Haven, Connecticut, and Stockbridge, Massachusetts.