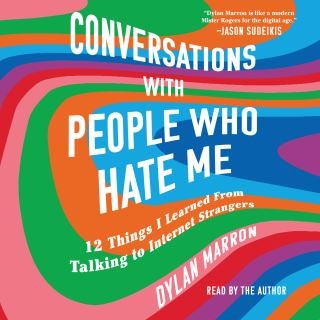 Conversations with People Who Hate Me

“Dylan Marron is like a modern Mister Rogers for the digital age.” —Jason Sudeikis

​​From the host of the award-winning, critically acclaimed podcast Conversations with People Who Hate Me comes a thought-provoking, witty, and inspirational exploration of difficult conversations and how to navigate them.

Dylan Marron’s work has racked up millions of views and worldwide support. From his acclaimed Every Single Word video series highlighting the lack of diversity in Hollywood to his web series Sitting in Bathrooms with Trans People, Marron has explored some of today’s biggest social issues.

Yet, according to some strangers on the internet, Marron is a “moron,” a “beta male,” and a “talentless hack.” Rather than running from this online vitriol, Marron began a social experiment in which he invited his detractors to chat with him on the phone—and those conversations revealed surprising and fascinating insights.

Now, Marron retraces his journey through a project that connects adversarial strangers in a time of unprecedented division. After years of production and dozens of phone calls, he shares what he’s learned about having difficult conversations and how having them can help close the ever-growing distance between us.

Charmingly candid and refreshingly hopeful, Conversations with People Who Hate Me will serve as both a guide to anyone partaking in dif­ficult conversations and a permission slip for those who dare to believe that connection is possible.

Dylan Marron: Dylan Marron is the host and creator of the critically acclaimed podcast Conversations with People Who Hate Me, a social experiment that connects adversarial internet strangers through phone calls. He recently joined the writing staff of the Emmy-winning hit television series Ted Lasso. Dylan is also the voice of Carlos on international podcast sensation Welcome to Night Vale, an alum of the New York Neo Futurists theater company, and the creator of Every Single Word, a video series that edits down popular films to feature only the words spoken by people of color. As a writer and correspondent at Seriously.TV, Dylan created, hosted, and produced Sitting in Bathrooms with Trans People, Shutting Down Bullsh*t, and the Unboxing series. Conversations with People Who Hate Me was selected as a Podcast Pick by USA TODAY and The Guardian, named “the timeliest podcast” by Fast Company, won a Webby Award, and was the subject of Dylan’s 2018 TED Talk “Empathy Is Not Endorsement.” He lives in Brooklyn, New York with his husband Todd.