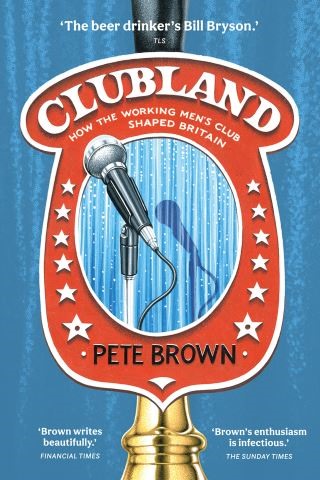 The untold story of a British institution.

Pete Brown is a convivial guide on this journey through the intoxicating history of the working men’s clubs. From the movement’s founding by teetotaller social reformer the Reverend Henry Solly to the booze-soaked mid-century heyday, when more than 7 million Brits were members, this warm-hearted and entertaining book reveals how and why the clubs became the cornerstone of Britain’s social life – offering much more than cheap Federation Bitter and chicken in a basket.

Often dismissed as relics of a bygone age – bastions of bigotry and racism – Brown reminds us that long before the days of Phoenix Nights, 3,000-seat venues routinely played host to stars like Shirley Bassey, Louis Armstrong, and the Bee Gees, offering entertainment for all the family, and close to home at that. Britain’s best-known comedians made reputations through a thick miasma of smoke, from Sunniside to Skegness. For a young man growing up in the pit town of Barnsley this was a radiant wonderland that transformed those who entered.

Brown explores the clubs’ role in defining masculinity, community and class identity for generations of men in Britain’s industrial towns. They were, at their best, a vehicle for social mobility and self-improvement, run as cooperatives for working people by working people: an informal, community-owned pre-cursor to the Welfare State.

As the movement approaches its 160th anniversary, this exuberant book brings to life the thrills and the spills of a cultural phenomenon that might still be rescued from irrelevance.

Pete Brown is a Barnsley-born author, journalist, blogger and broadcaster specialising in food and drink. He writes for newspapers and magazines around the world and is a regular contributor to BBC Radio 4’s Food Programme. He was named British Beer Writer of the Year in 2009, 2012, 2016, and 2021, has won three Fortnum & Mason Food and Drink Awards, and has been shortlisted twice for the André Simon Awards. He blogs at petebrown.net and can be found on Twitter as @PeteBrownBeer