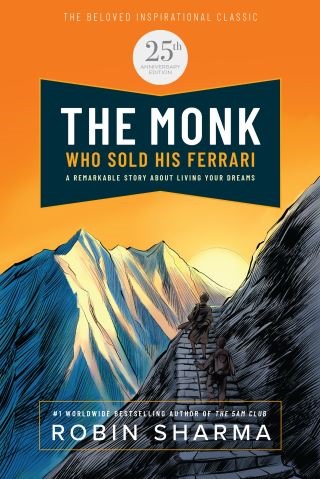 The Monk Who Sold His Ferrari: Special 25th Anniversary Edition

Twenty-five years ago, a book was published that has transformed millions of lives.

Sharing the astounding story of Julian Mantle, the superstar trial lawyer whose stunning material success masked unhappiness within, The Monk Who Sold His Ferrari was initially self-published in a small quantity but quickly became a word-of-mouth inspirational phenomenon that spread across the entire world.

Now, with millions of copies sold, the life-changing wisdom contained in this #1 bestselling classic is even more relevant, as we seek happiness, fearlessness and a life that truly matters in these times of deep uncertainty.

This limited 25th anniversary edition features a new introduction from the author and a special journal to help you materialize your highest desires. So you lead a life that electrifies your genius.

ROBIN SHARMA is a humanitarian who has devoted his life to helping people express their highest natural gifts. He is widely regarded as one of the top leadership and personal-mastery experts in the world. His clients include NASA, Microsoft, NIKE, Unilever, GE, FedEx, HP, Starbucks, Oracle, Yale University, PwC, IBM Watson and the Young Presidents’ Organization. His #1 international bestsellers, such as The 5 AM Club, The Greatness Guide and Who Will Cry When You Die?, have sold millions of copies in over ninety-two languages, making him one of the most widely read authors on the planet.