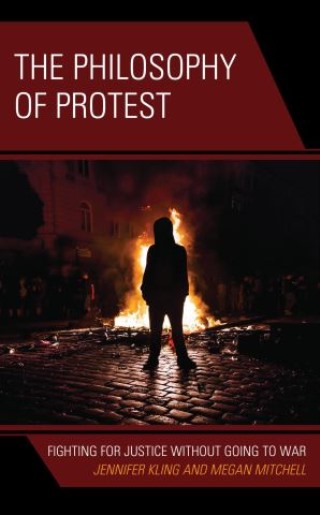 The Philosophy of Protest

Fighting for Justice without Going to War

Protest is a critical part of the contemporary political landscape. Despite the prevalence of protest as a real-world practice, most liberal political theory limits its focus on protest to ideal conditions. This book takes up the question of how to think about protest, from within the context of liberal political theory, in the face of serious, substantial, ongoing, and actual injustices—in short, a theory of protest for our world. What can or must protest include? What, if anything, must it avoid? Against much of the popular discourse, the authors defend the view that suitably constrained violent political protest is sometimes justified. Violent political protest is not simply revolution by any other name—it’s a last-ditch effort to remedy injustice without going to war.

Jennifer Kling: Jennifer Kling is assistant professor of philosophy at the University of Colorado, Colorado Springs. Her research focuses on moral and political philosophy, particularly issues in war and peace, self- and other-defense, international relations, and feminism. She is the author of articles in Journal of Global Ethics and The Routledge Book of Pacifism and Nonviolence, and is the editor of Pacifism, Politics, and Feminism: Intersections and Innovations (Brill, forthcoming). She is currently working on a book project entitled War Refugees: Risk, Justice, and Moral Responsibility (under contract with Lexington Books).|||Megan Mitchell is Assistant Professor of Philosophy at Stonehill College in North Easton, Massachusetts. Her work is in political philosophy, particularly issues of race, gender, and political philosophy. She is the author of “The Dimensions of Diversity: Teaching Non-Western Works in Introductory Philosophy Courses,” in Dialogue: Canadian Philosophical Review.