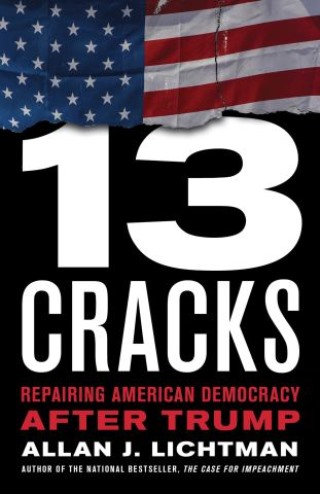 America’s founders feared a president like Donald Trump. Through the Constitution and the Bill of Rights, they erected a fortified but constrained government to secure the benchmarks of our democracy and established the guardrails designed to protect it. But Trump pushed almost every one of the Framers’ safeguards to its limit—most held, but some broke under the weight of presidential abuses even the Framers did not foresee.

Thirteen Cracks will be the first book to expose the most vulnerable areas in our democracy, explain in historical context how President Trump uniquely and outrageously exploited these weak spots, and propose a fix for each challenge. Historian Allen J. Lichtman argues that Trump has put us at a pivot point in our history, where the survival of American democracy is at stake. But this is also an historic opportunity to shore up the vulnerabilities and to strengthen our democracy.

Allan J. Lichtman is Distinguished Professor of History at American University and the author of many acclaimed books on U.S. political history, including White Protestant Nation: The Rise of the American Conservative Movement, which was a finalist for the National Book Critics Circle Award, FDR and the Jews (with Richard Breitman), and The Case for Impeachment. He is regularly sought out by the media for his authoritative views on voting and elections. He lives in Bethesda, Maryland.