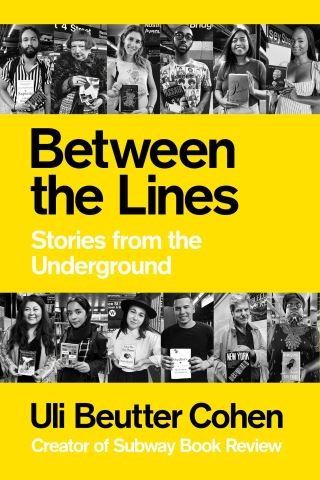 Stories from the Underground

From the acclaimed creator of Subway Book Review, Between the Lines gloriously takes to the underground and showcases in over 170 interviews what moves us forward—a thrilling ride as unexpected as New York City itself.

“Subway Book Review has changed how we look at books.” —Forbes
“[Beutter Cohen’s] rosy view of the subway is a refreshing contrast.” —The Cut, New York magazine
“Subway Book Review is one of the few purely good things on the internet.” —Esquire

For the better part of a decade, Uli Beutter Cohen rode the subway through New York City’s underground to observe society through the lens of our most creative thinkers: the readers of books. Between the Lines is a timely collection of beloved and never-before-published stories that reflect who we are and where we are going. In over 170 interviews, Uli shares nuanced insights into our collective psyche and gives us an invaluable document of our challenges and our potential. Complete with original photography, and countless intriguing book recommendations, Between the Lines is an enthusiastic celebration of the ways stories invite us into each other’s lives, and a call to action for imagining a bold, empathetic future together.

Uli Beutter Cohen: Uli Beutter Cohen is a New York City–based documentarian, artist, and the creator of Subway Book Review. She explores belonging to a time and place through writing and photography. Uli is a sought-after speaker and panelist. Her work has been featured in print, on TV, and online by New York magazine; Esquire; Vogue; Forbes; O, The Oprah Magazine; Glamour; the BBC; and The Guardian, among others. Between the Lines: Stories from the Underground is her first book. Uli lives in Brooklyn. Visit @TheUBC, @SubwayBookReview, and SubwayBookReview.co to hear more.