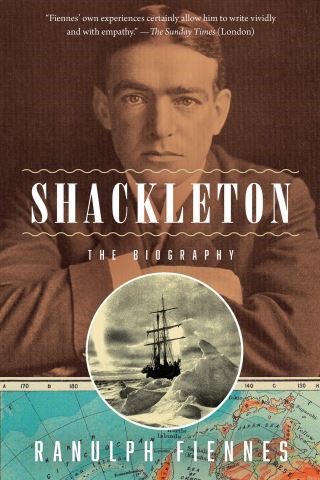 “When Ranulph Fiennes produces a book about Ernest Shackleton, it should get our attention. I found that the best way to read this book is to imagine that you are in a pub sharing a beer with Sir Ranulph while he regales you with his tale about Ernest Shackleton. Fiennes moves the narrative along at a good pace and his storytelling becomes particularly animated when he is describing the actual grind of slogging through the snow and ice.”—Lloyd Spencer Davis, The New York Times Book Review (front page review)

To write about Hell, it helps if you have been there.

In 1915, Sir Ernest Shackleton's attempt to traverse the Antarctic was cut short when his ship, Endurance, became trapped in ice.

The disaster left Shackleton and his men alone at the frozen South Pole, fighting for their lives. Their survival and escape is the most famous adventure in history.

Shackleton is a captivating new account of the adventurer, his life and his incredible leadership under the most extreme of circumstances. Written by polar adventurer Sir Ranulph Fiennes who followed in Shackleton's footsteps, he brings his own unique insights to bear on these infamous expeditions. Shackleton is both re-appraisal and a valediction, separating Shackleton from the myth he has become.

Fiennes Ranulph: Ranulph Fiennes is the only man alive ever to have traveled around the Earth’s circumpolar surface—and his Arctic and Antarctic expeditions give him a unique perspective on the life of Shackleton. His record-breaking expeditions include travel by riverboat, hovercraft, man-haul sledge, skidoo, Land Rover, and skis. When not on one of his adventures, he lives in Britain.