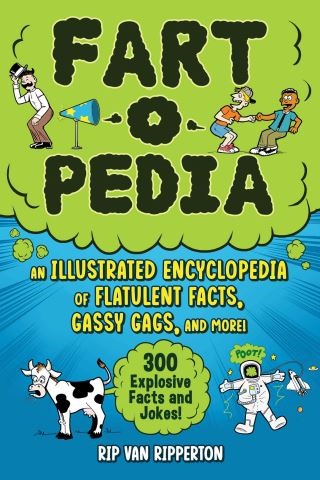 With humorous entries that include types of farts, food items that cause gas, what farts are called in different countries, jokes and riddles, sidebars, science, rules, advice, how to’s, and more, this book is the gassiest gift for the fart fan in any family. It contains a mishmash of information, perfect for bathroom reading and rippin' jokes with your pals.

Dog, the: Who you blame when you pass gas at the dinner table.

How to save a fart for later.

"Hoof Hearted Ice Melted:" Say it out loud five times. You’ll get it.

Pull my finger: What someone says to a friend when they have a fart locked and loaded. Once the friend pulls the finger, the fart is unleashed. Great trick that only works once.

Silent but deadly (SBD): A fart that comes out with barely a whisper but then knocks everyone out with its noxious stench.

Rip Van Ripperton: Rip Van Ripperton is a pen name for an author who doesn’t want his parents to know he wrote a book about farts, even though, secretly, he is very proud of this accomplishment. When not writing, Rip enjoys eating beans and broccoli, tooting his own horn, and then blaming his dog, Rooster. Poor Rooster!