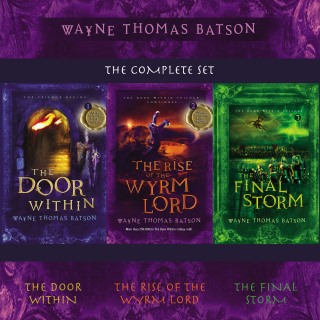 The Door Within Trilogy

An exciting fantasy adventure by bestselling author Wayne Thomas Batson that will draw tweens into an unseen world of good and evil where nightmares are fought and hope is reborn.

This gripping fantasy series that has sold more than 85,000 copies

This audio collection includes all three novels in the Door Within trilogy, for 8- to 12-year-olds:

The Door Within: Aidan Thomas is struggling with attending a new school and making new friends after moving to his ailing grandfather’s house. But in the basement, Aidan discovers a mysterious invitation to another world, where he finds himself in the middle of a long-fought war between good and evil. With the fate of two worlds hanging in the balance, Aidan faces Paragory, the eternal enemy with unfathomable power. Will Aidan be willing to risk everything and trust the unseen hand of the one true King?

The Rise of the Wyrm Lord: Aidan Thomas is in trouble. Unable to return to The Realm of Glimpses, Aidan needs a way to reach his best friend, Robby, who is still there with a message from King Eliam, the one true King. When Aidan discovers that Antoinette Reed has been called to enter The Realm, he asks her help to find Robby before it is too late. But when Antionette arrives in the Kingdom of Alleble, Antoinette finds the kingdom is in turmoil. Alleble's allies are suddenly turning away and there are rumors that the dark Prince of Paragory is seeking an ancient evil power to crush the Alleble once and for all.

The Final Storm: Pure evil collides as Paragor unites with the Wyrm Lord and the mythical Seven Sleepers to launch a full-scale assault on the Kingdom of Alleble. While Alleble and its allies prepare to face the coming onslaught, they cling to an ancient legend about three witnesses who have the power to bring victory. But is the legend true? And if it is, where are the witnesses? Time is running out as darkness spreads over the Realm, and Paragor unleashes the final storm. Will anyone survive to see the dawn?