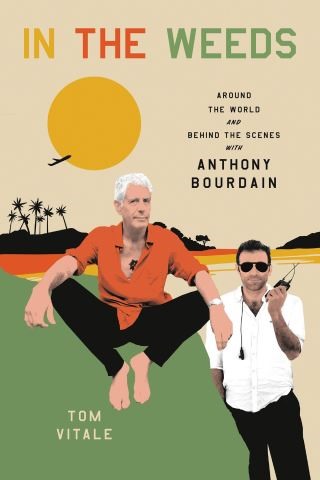 Around the World and Behind the Scenes with Anthony Bourdain

**Nominated for the 2022 BookTube Prize in Nonfiction**

Anthony Bourdain's long time director and producer takes readers behind the scenes to reveal the insanity of filming television in some of the most volatile places in the world and what it was like to work with a legend.

In the nearly two years since Anthony Bourdain's death, no one else has come close to filling the void he left. His passion for and genuine curiosity about the people and cultures he visited made the world feel smaller and more connected. Despite his affable, confident, and trademark snarky TV persona, the real Tony was intensely private, deeply conflicted about his fame, and an enigma even to those close to him. Tony’s devoted crew knew him best, and no one else had a front-row seat for as long as his director and producer, Tom Vitale.

Over the course of more than a decade traveling together, Tony became a boss, a friend, a hero and, sometimes, a tormentor.In the Weeds takes readers behind the scenes to reveal not just the insanity that went into filming in some of the most far-flung and volatile parts of the world, but what Tony was like unedited and off-camera. From the outside, the job looked like an all-expenses-paid adventure to places like Borneo, Vietnam, Iran, the Democratic Republic of Congo, and Libya. What happened off-camera was far more interesting than what made it to air. The more things went wrong, the better it was for the show. Fortunately, everything fell apart constantly.

Tom Vitale:
Season after season Tom Vitale traveled with Anthony Bourdain on a near-nonstop run of eighty trips—roughly five trips a year—to almost every corner of the globe, constantly meeting strangers, often through the context of their food and culture, in the process making over 100 episodes of TV. In addition to the adventure of a lifetime, personal enrichment, and experiences he would never have thought possible, his work rewarded him with a PGA Award nomination, five Emmy wins and four nominations, a Gold World Medal for Best Non-Fiction Program, and he is credited on Parts Unknown's Peabody Award.