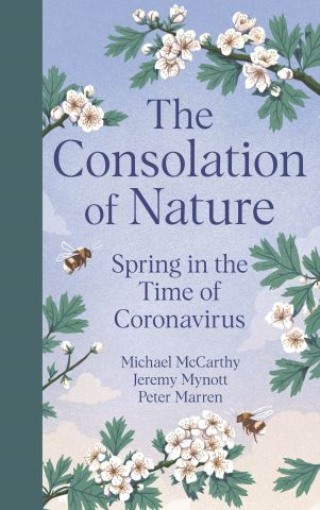 The Consolation of Nature

Spring in the Time of Coronavirus

ONE OF THE GUARDIAN'S BEST NATURE BOOKS OF 2020

'Lovely: full of fascinating detail and anecdote, but the undertow of the virus moving in real time beneath its sunlit surface gives it a unique emotional heft.'
-The Times

'A literary window into the wonderful wild world during lockdown... a charming book.'
-Daily Mail

'An entrancing testament to nature's power to restore us to ourselves.'
-Ruth Padel

Nature took on a new importance for many people when the coronavirus pandemic arrived, providing solace in a time of great anxiety - not least because the crisis struck at the beginning of spring, the season of light, growth, rebirth and renewal.

Three writers, close friends but living in widely separated, contrasting parts of the country, resolved to record their experiences of this extraordinary spring in intimate detail, to share with others their sense of the wonder, inspiration and delight the natural world can offer.

The Consolation of Nature is the story of what they discovered by literally walking out from their front doors.

Michael McCarthy: Michael McCarthy is one of Britain's leading writers on the environment and the natural world. As a journalist, he was the Environment Correspondent of The Times, covering the early measures taken to combat climate change, culminating in the Earth Summit at Rio de Janeiro; later he was the long-standing Environment Editor of The Independent. He has won a string of awards for his work, including Environment Journalist of The Year in the British Environment and Media Awards (three times); Specialist Writer of The Year in the British Press Awards; the Silver Medal of the Zoological Society of London; the Dilys Breeze Medal of the British Trust for Ornithology; and the Medal of the RSPB for 'outstanding services to conservation.' As an author he has written Say Goodbye to the Cuckoo (2009), a study of Britain's summer migrant birds, which was widely praised; The Moth Snowstorm: Nature and Joy (2015), which was shortlisted for the Wainwright Prize and the Richard Jefferies Prize, and described by The New York Times as "an idiosyncratic and wonderful walk through his joy of nature"; and (with Jeremy Mynott and Peter Marren) The Consolation of Nature - Spring in The Time of Coronavirus (2020) which was chosen as one of The Guardian's Nature Books of The Year.|||Jeremy Mynott is a classical scholar, Emeritus Fellow of Wolfson College, Cambridge and former Chief Executive of Cambridge University Press. He is the author of various books on wildlife and nature. Birdscapes: birds in our experience and imagination (2009) was described by one reviewer as 'the finest book ever written on why we watch birds'. His latest book, Birds in the Ancient World: Winged Words (2018), was shortlisted for the Wolfson History Prize and was a TLS 'Book of the Year'.|||

Peter Marren is a nature writer and commentator, author of Bugs Britannica, Rainbow Dust, Chasing the Ghost and many other books on British plants, insects, and the countryside. He won the BSBI President's Prize for Britain's Rare Flowers, which was also runner-up for the Natural World Book Prize. He was awarded the Thackray Medal for The New Naturalists by the Society for the History of Natural History. His satirical column in British Wildlife magazine, Twitcher in the Swamp, has a cult following.

He is also a Fellow of the Linnaean Society and has travelled the world in search of wildlife and has co-led wildlife tours all around Europe. He has written papers on endangered species and official reports on local extinctions. He waited until reaching an appropriately mature age before tackling the subject that energises all our efforts to preserve what is left of the world's wildlife and wild places: extinction.