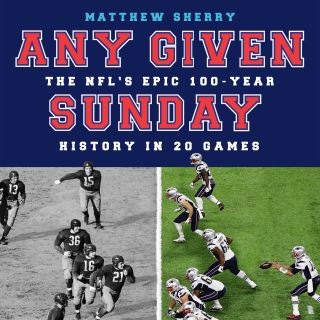 An authoritative 100-year history of America's National Football League from its founding.

The NFL has become the most lucrative sports league in the world, yet it has not always been a roaring success story. It is a rocky road filled with detours and wrong turns; with heroes and villains; and, most importantly, with thousands of games. Any Given Sunday recounts twenty of the biggest of those, starting with the first contest ever played in 1920 and working through to key fixtures in the recent past. Each chapter is complemented by interviews with some of the game's true stars; first-hand accounts from games, including multiple Super Bowls; and, finally, full access to the Pro Football Hall of Fame.

Matthew Sherry, founder of Gridiron, the UK's only NFL magazine, takes readers from the boardroom to the field, into the locker-room and inside the journeys of legends, providing a full snapshot of the NFL's epic first century.

Matthew Sherry: Matthew Sherry is the founder and editor of Gridiron, the UK's only NFL magazine. Over the course of his journalistic career, Matthew has reported on a wide variety of major sporting events, including the Olympic Games, the Ashes, Premier League football and, of course, the NFL. He has covered every Super Bowl since the 48th edition between the Seattle Seahawks and Denver Broncos, and also travels around the United States each year interviewing some of American football's biggest names. Matthew lives in Hartlepool.