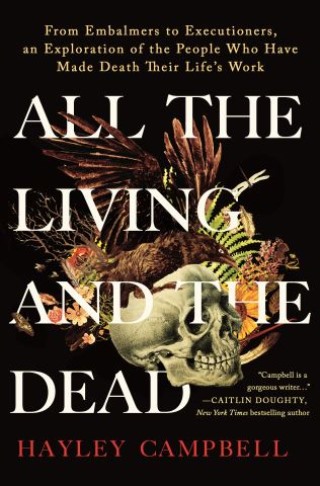 All the Living and the Dead

From Embalmers to Executioners, an Exploration of the People Who Have Made Death Their Life's Work

A deeply compelling exploration of the death industry and the people—morticians, detectives, crime scene cleaners, embalmers, executioners—who work in it and what led them there.

We are surrounded by death. It is in our news, our nursery rhymes, our true-crime podcasts. Yet from a young age, we are told that death is something to be feared. How are we supposed to know what we’re so afraid of, when we are never given the chance to look?

Fueled by a childhood fascination with death, journalist Hayley Campbell searches for answers in the people who make a living by working with the dead. Along the way, she encounters mass fatality investigators, embalmers, and a former executioner who is responsible for ending sixty-two lives. She meets gravediggers who have already dug their own graves, visits a cryonics facility in Michigan, goes for late-night Chinese with a homicide detective, and questions a man whose job it is to make crime scenes disappear.

Through Campbell’s incisive and candid interviews with these people who see death every day, she asks: Why would someone choose this kind of life? Does it change you as a person? And are we missing something vital by letting death remain hidden? A dazzling work of cultural criticism, All the Living and the Dead weaves together reportage with memoir, history, and philosophy, to offer readers a fascinating look into the psychology of Western death.

Hayley Campbell: Hayley Campbell is an author, broadcaster, and journalist. Her work has appeared in WIRED, The Guardian, New Statesman, Empire, GQ, and more. Her books include All the Living and the Dead and The Art of Neil Gaiman. She lives in London with her cat, Ned.