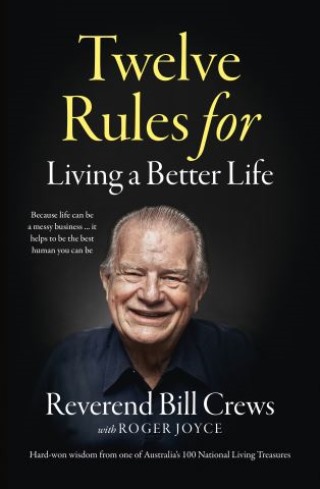 12 Rules for Living a Better Life

A straight-talking, uplifting and inspiring guide to living a better life and becoming a better human being - through compassion, tolerance, acceptance and love - from one our very best, most authentic and genuine people, the Reverend Bill Crews.

He's been named one of Australia's 100 most influential people, yet he's often considered a thorn in the side of his own church. He's a fierce campaigner against poker machine gambling yet it was the proceeds of a horse race that first established his soup kitchen that now feeds thousands across the city. His Sunday-night radio show is the most widely listened to across the nation, but he often makes the news himself. He is a 75-year-old minister and regularly inspires news article headlines that read: 'What if we were all like Bill Crews?' He is the epitome of compassion and often controversial. He is Bill Crews, the charismatic shepherd of Ashfield in Sydney's inner-west.

Bill has spent his entire adult life in the service of others, giving a voice to the truly voiceless, be they prostitutes on the streets of Sydney's Kings Cross, refugees fleeing ISIS in a shanty-town camp in Northern France, or Korean women abused during WWII. Bill Crews has spent an unfathomable amount of hours on the frontline of life with the marginalised, disenfranchised and the abandoned.

This book is for the secular and the spiritual alike; it's for those who believe and those who don't, won't or can't. It's a much-needed and timely manifesto on being a better human and how to pay it forward. It's bottled wisdom - to help us all live a better life.

Rev. Bill Crews AM is a much-loved Australian. He has given over 3 million meals to the poor and homeless. He has also taught thousands of underprivileged kids to read so they can break free of the poverty-cycle. His work has been recognised by organisations as varied as The Rotary Foundation and Ernst & Young. In addition Rev. Crews has been included in the National Trust's list of 100 "National Living Treasures" and he has been named as one of Australia's 100 most influential people. He also hosts a weekly radio show which is broadcast across Australia.