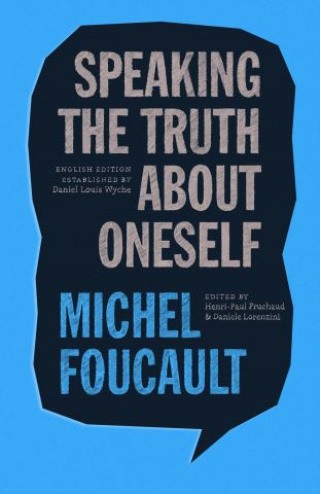 Speaking the Truth about Oneself

Now in paperback, this collection of Foucault’s lectures traces the historical formation and contemporary significance of the hermeneutics of the self.

Just before the summer of 1982, French philosopher Michel Foucault gave a series of lectures at Victoria University in Toronto. In these lectures, which were part of his project of writing a genealogy of the modern subject, he is concerned with the care and cultivation of the self, a theme that becomes central to the second, third, and fourth volumes of his History of Sexuality. Foucault had always been interested in the question of how constellations of knowledge and power produce and shape subjects, and in the last phase of his life, he became especially interested not only in how subjects are formed by these forces but in how they ethically constitute themselves.

In this lecture series and accompanying seminar, Foucault focuses on antiquity, starting with classical Greece, the early Roman empire, and concluding with Christian monasticism in the fourth and fifth centuries AD. Foucault traces the development of a new kind of verbal practice—“speaking the truth about oneself”—in which the subject increasingly comes to be defined by its inner thoughts and desires. He deemed this new form of “hermeneutical” subjectivity important not just for historical reasons, but also due to its enduring significance in modern society.

Michel Foucault: Michel Foucault (1926–84) was a French philosopher and historian who held the Chair of the History of Systems of Thought at the Collège de France. His many books in English include The Order of Things, Discipline and Punish, The History of Sexuality, and “Discourse and Truth” and “Parrēsia,” the latter also published by the University of Chicago Press. Henri-Paul Fruchaud is an editor of Michel Foucault’s posthumous works. Daniele Lorenzini is assistant professor of philosophy and deputy director of the Centre for Research in Post-Kantian European Philosophy at the University of Warwick. Daniel Louis Wyche is visiting assistant professor of religious studies at Albion College.