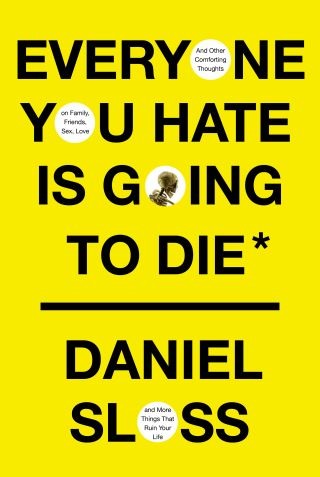 Everyone You Hate Is Going to Die

And Other Comforting Thoughts on Family, Friends, Sex, Love, and More Things That Ruin Your Life

One of this generation's hottest and boldest young comedians presents a transgressive and hilarious analysis of all of our dysfunctional relationships, and attempts to point us in the vague direction of sanity.

Daniel Sloss's stand-up comedy engages, enrages, offends, unsettles, educates, comforts, and gets audiences roaring with laughter—all at the same time. In his groundbreaking specials, seen on Netflix and HBO, he has brilliantly tackled everything from male toxicity and friendship to love, romance, and marriage—and claims (with the data to back it up) that his on-stage laser-like dissection of relationships has single-handedly caused more than 300 divorces and 120,000 breakups.

Now, in his first book, he picks up where his specials left off, and goes after every conceivable kind of relationship—with one's country (Sloss's is Scotland); with America; with lovers, ex-lovers, ex-lovers who you hate, ex-lovers who hate you; with parents; with best friends (male and female), not-best friends; with children; with siblings; and even with the global pandemic and our own mortality. In Everyone You Hate Is Going to Die, every human connection gets the brutally funny (and unfailingly incisive) Sloss treatment as he illuminates the ways in which all of our relationships are fragile and ridiculous and awful—but also valuable and meaningful and important.

Daniel Sloss: DANIEL SLOSS finds About the Author descriptions wanky and outdated. He would just like you to watch his fucking comedy specials. The publisher, on the other hand, would like you to know that Daniel Sloss is an internationally acclaimed, award-winning Scottish comedian and writer. He has created eleven solo shows, toured them in theaters, music venues, and arenas across fifty countries to rave reviews, and his specials, including X on HBO as well as DARK and Jigsaw, on Netflix, can be seen in a total of 190 countries. Despite the relationship and marital mayhem he has caused, Sloss still believes in love. Sloss is thirty and lives in Scotland, his "forever home."